During import, MAXQDA automatically generates one code in the code system for each participant in the focus group and automatically codes all of a participant’s contributions with their code for later analysis and differentiation. To ensure that this automatic import process runs smoothly, MAXQDA places the following requirements on the structure of the transcript:

Let’s take the following interview with multiple speakers as an example:

Moderator: Hello everyone, thank you very much for your participation! This study examines how the balance of work and leisure time affects the general feeling of happiness. I have invited you to this interview because you all have a part-time job in addition to your studies. I would be very interested in hearing how you are doing in your studies and in your job. First of all, I would like to ask you why you decided to work while studying. Maybe we can go around the room; if you have any comments in the meantime, feel free to chime in.

Olga: Well, I started working because I wanted to gain work experience but by now it’s mainly because I need money.

Fatima: Yes, I didn’t really have a choice either. I have to work alongside university because otherwise I can’t afford to study. I have to support myself financially.

Andy: It’s the same for me. For financial reasons and also to not be dependent on my parents.

Pranav: Yes, for me that’s also the case. I need money to pay rent and to make ends meet. And at the same time, in my industry you need a certain amount of work experience or let’s say, it’s not bad to have some work experience when you graduate.

Moderator: Was it also that professional experience… did that also play a role? You mentioned this already, Pranav- what do the others think?

Andi: Yes, work experience- I think… in any case internships always look good on your CV, especially in the social sciences, in political science, internships are incredibly important in those fields, if you can manage to land some, of course.

After selecting Import > Focus group Transcripts and choosing a file, an import dialog opens in MAXQDA. This import dialog shows all identified speakers in your transcript and allows you to select which of the recognized speakers should be coded and with which name. 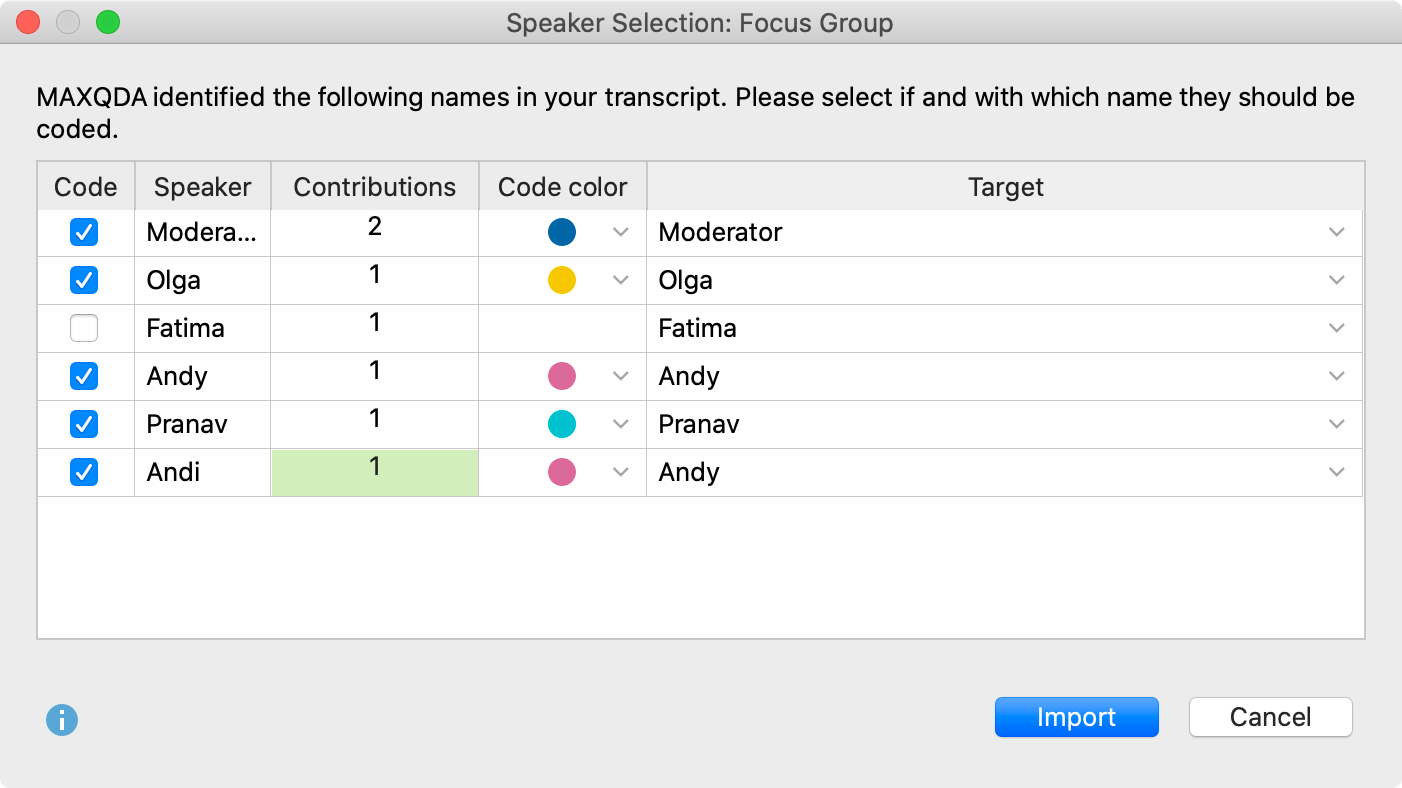 In the import dialog, you can directly assign a code color to the speakers. Furthermore, you can combine several different spellings for the same person in one speaker. This can, e.g., be useful if a name of one participant in the transcript contains typing errors. In the column “Target”, select the correct name of a speaker if you identify a misspelled name in the “Speaker” column.

Tip: When importing the transcript you should check the names of the speakers for typographical errors. This will avoid frustration later, in the case that the same person appears twice under different names because the name was written or spelled differently. Since the speaker code cannot be deleted, you would have to make the appropriate modifications in a word processing program and then import the transcript again.

Following a successful import, MAXQDA opens the transcript immediately in the “Document Browser”, and from the coding stripes in the margin you can see that the speech contributions have already been coded. During the import MAXQDA creates a new document in the “Document System” with the filename of the transcript. This document has its own symbol, which allows you to immediately recognize that it relates to a focus group. Below the document, the speakers of are listed individually, with the number at the end of the line indicating the number of contributions. The speakers are attached to their transcripts. If you move the document, the speakers will move with it. Only the order of speakers can be adjusted with the mouse. Like other documents, focus groups documents can be assigned to a document group or set.

In the “Code System” you will see a very similar listing: At the bottom, a code with the name of the imported data will appear, with the speakers listed as subcodes, and the same

The fact that the speakers are available both in the “Document System” and in the “Code System” opens up extensive possibilities for the analysis, as the speakers can be activated as independent codes and as document subsets. More information: Analyzing Focus Group Data.

When you import multiple transcripts, a unique code will be assigned to each focus group along with subcodes for the respective speakers. The speaker codes are firmly attached to their top-level code, and their order can be modified only under this top-level code.

Tip: The automatic coding function for speakers may be useful for other types of documents in which multiple individuals interact, for example forum discussions or comments on YouTube videos.

Converting an already existing text into a focus group transcript

Sometimes you realize that it would have been better to import a text as a focus group transcript into MAXQDA after you have already imported and coded it as a normal text document. Or you have transcribed an interview with several participants in MAXQDA and would like to code all of the speakers and their contributions automatically. In both cases you can use the function Convert Text to Focus Group Transcript, which is available in the Import tab. You can either convert the currently displayed document in the “Document Browser” or you can activate (several) documents you want to convert and choose Convert Activated Document(s). The same dialog as for importing focus group documents appears and MAXQDA will insert a copy of the text as a focus group document: