When assigning codes to qualitative data, it is recommended to specify certain qualitaty criteria. You assume, for example, that coding is not arbitrary or random, but rather that a certain level of agreement between coders will be reached. The MAXQDA Intercoder Agreement function makes it possible to compare the coding of two people who coded the data independently of each other. In qualitative research, the purpose of comparing independent coders is to discuss the differences, figure out why they occurred, and learn from the differences in order to improve coding agreement in the future. In other words, the actual percentage of agreement is not the most important aspect of the tool. Anyhow, this percentage is provided by MAXQDA.

It is always the goal of qualitative analysts to achieve as high a level of agreement as possible between independent coders. It is not, however, focused on getting to a fixed statistical coefficient as is common practice in quantitative research. Rather, the focus is on a practical improvement of the coding quality. For this reason, one does not stop at the determination of a coefficient,. Instead, qualitative researchers want to address and edit the code assignments that do not match, so that they can move on with more accurately coded material.

The following procedure is recommended: 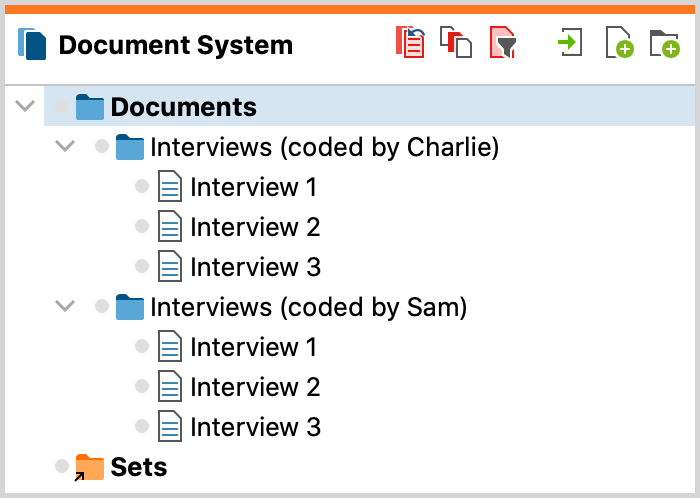 You can start the procedure via Analysis > Intercoder Agreement to check whether two coders agree or disagree in their assignment of codes.

The following dialog box will appear, in which you can adjust the settings for checking the intercoder agreement. 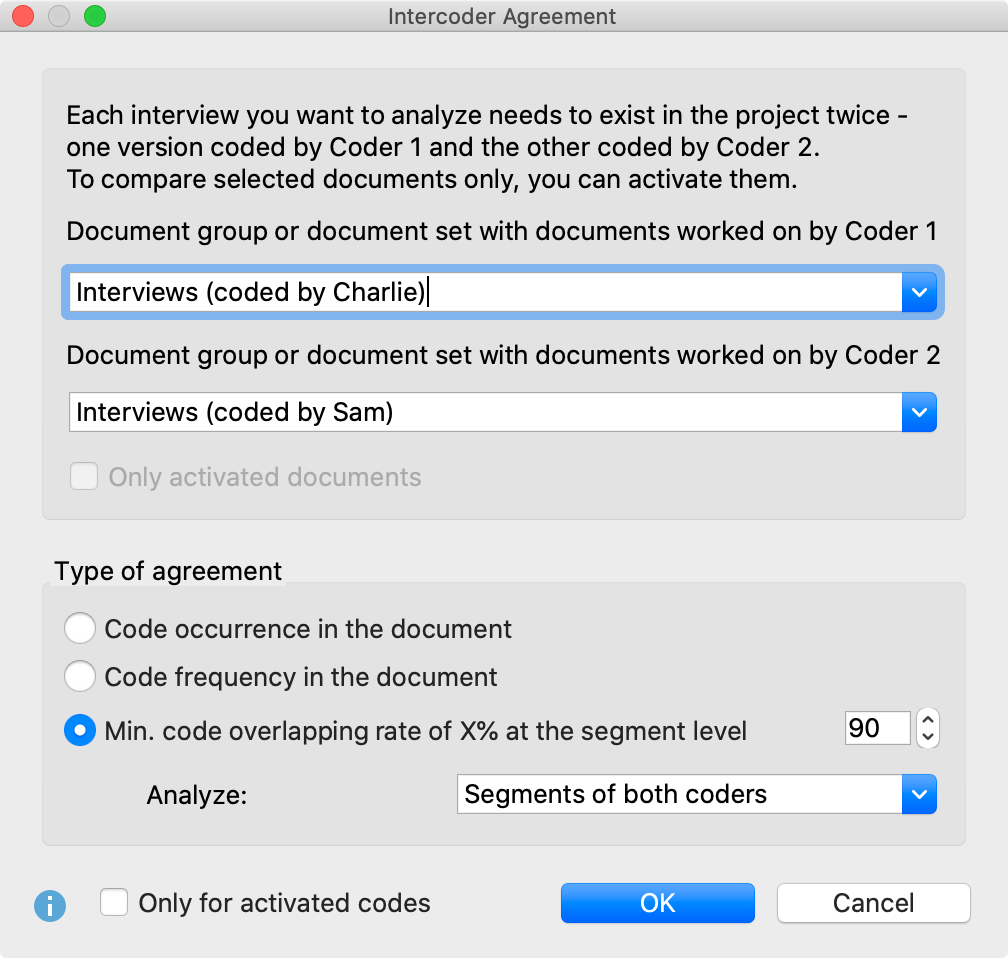 In the following, all three variants and the respective presentation of results are explained in detail.

Per document, it is checked whether both persons have assigned the same codes. Thus, the criterion of comparison is the occurrence or absence of a code in the document. This option can be useful, for example, if you are working with relatively short documents, such as free text responses to a survey, and with a large number of codes.

MAXQDA generates two tables, the “code-specific results table” with the analyzed codes and the “result table” with detailed information on each compared document.

The “code-specific results table” lists all evaluated codes and indicates for how many documents the coders match in their assignment of the code:

The example table indicates on the top right that a total of 5 codes were analyzed. There was disagreement for the code “Sibling” and the code “Grandparents”, both only within one document which is indicated by the column “Disagreements” (the numbers in the columns “Agreement”, “Disagreements”, and “Total” refer to the number of documents).

The result table lists all evaluated documents and thus provides detailed information on the agreement of individual documents.

The table has the following structure:

In addition to the usual MAXQDA functions for opening the function again and for filtering and exporting the results, the toolbar also contains the following important tools:

Display only disagreements – Hides all matching rows and provides quick access to documents where the coders do not match.

Code C was included in the intercoder agreement check but was neither assigned by Coder 1 nor by Coder 2 in the document. In this case, if you select the option Ignore unassigned codes, code C will be ignored and the relative number of matching code assignments is 1 of 2 = 50%. If the other option is selected, the match is 2 of 3 = 67 %, because code C is taken into account.

The results table is interactive. Double clicking on a row opens the Code Matrix Browser for the relevant document:

In the “Kappa (RK)” column, the results table indicates a randomly corrected value for the percentage agreement. It takes into account the probability of two people randomly selecting and assigning the same codes in a document (if they simply randomly selected codes without considering the data material). The calculation only makes sense if you select the option Count unassigned codes as matches and is therefore only visible if this option is selected.

The random correction is generally very small, because the probability for the random match very quickly becomes negligible with an increasing number of codes. Therefore, it only makes sense to use this correction, if you are including a maximum of 3 codes in the intercoder check.

With this analysis option, agreement is deemed to apply when two coders have assigned a code with the same frequency in the document. The difference between the frequencies is irrelevant: if one coder assigns a code A once and the other three times, or if the difference is once vs. six times, both situations are always considered to be a disagreement.

The results for this second analysis option corresponds, in principle, to the first option – with the following exceptions:

The system checks whether the two coders match in their coding of individual segments. This option is the most advanced of the three and is the most commonly used option for qualitative coding.

Since texts in qualitative analysis processes are not often subdivided into fixed text units, the system checks the correspondence for each segment coded by the two coders (dialog option Analysis: Segments of both coders). This means that each coded segment is analyzed for a match. If, for example, Coder 1 has coded 12 segments and Coder 2 has coded 14, then 26 test operations are performed and the detailed results table includes exactly 26 rows. Alternatively, you can choose to analyze only the segments of document 1 or the segments of document 2. This can be helpful, for example, to test the extent to which one coder matches a reference example for code assignments.

It is often the case that coders deviate slightly from each other when assigning codes, e.g. because a person has coded one word more or less. This is usually irrelevant in terms of content, but can lead to an unnecessarily small percentage match if absolutely identical coding is evaluated, and lead to “false” disagreements.

Results for option 3 „Min. code intersection rate of X% at the segment level“

With this option, the system checks at the segment level whether the codes match. If, for example, Coder 1 has coded 12 segments and Coder 2 has coded 14, then 26 test operations are performed and the detailed results table includes exactly 26 rows.

It is often the case that coders deviate slightly from each other when assigning codes, e.g. because a person has coded one word more or less. This is usually irrelevant in terms of content, but can lead to an unnecessarily small percentage match if absolutely identical coding is required, and lead to “false” non-agreements.

The entry is made as a percentage and the threshold value can be set in the dialog box. The default value is 90%, but can be set higher for testing purposes and then reduced step by step if there are too many “false alarms”.

This table has as many rows as the number of codes included in the intercoder agreement check. Codes that were not assigned by either of the two coders are not included in the table even they have been selected for the intercoder check. The table provides an overview of the matches (agreements) and non-matches (disagreements) in code assignments between the two coders. It reveals the weak points, i.e., for which codes the desired percentage agreement is not achieved.

For each code, the table indicates the total number of segments coded (“Total” column), the number of matches (agreements), and the code-specific agreement percentage. In the <Total> row, the (dis)agreements are added so that an average percentage agreement can be calculated. In the example, this is 93.08%.

The second table allows for an exact inspection of the intercoder agreement, i.e. it is possible to determine for which coded segments the two coders do not match. Depending on the selected setting, the table contains the segments of both coders, or only those of one coder, and indicates whether the second coder has assigned the same code at the segment’s location. 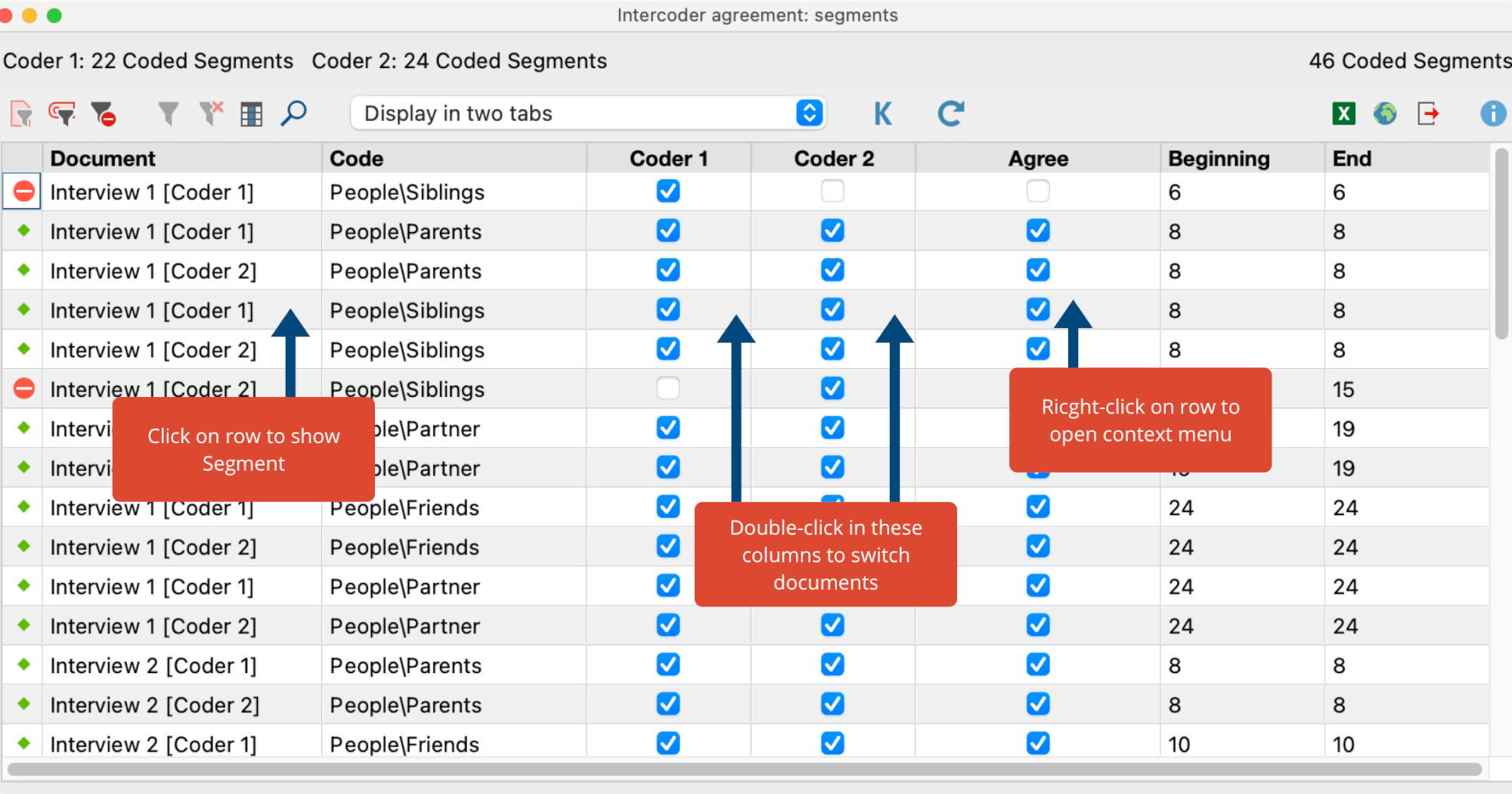 Agreement in the assignment of a code to a given segment is indicated by the green symbol in the first column. A red icon in this column indicates that there is a disagreement for this segment.

Tip: Clicking on the first column header sorts the column so that all red rows in the table are listed at the top and you can inspect and discuss any discrepancies step by step. By clicking on the

icon, only the problematic segments are displayed.

The results table is interactively linked to the original data and allows for a targeted inspection of the analyzed segments:

In qualitative analysis, the analysis of intercoder agreement serves primarily to improve coding instructions and individual codes. Nevertheless, it is also often desirable to calculate the percentage of agreement, particularly in view of the research report to be generated later. This percentage of agreement can be viewed in the code-specific results table above, in which individual codes as well as the ensemble of all codes are taken into account.

Researchers often express the desire to indicate not only percentage agreement rates in their research reports, but also to include chance-corrected coefficients. The basic idea of such a coefficient is to reduce the percentage of agreement by that value which would be obtained in a random assignment of codes to segments.

In MAXQDA, the commonly used coefficient “Kappa (Brennan & Prediger, 1981)” can be used for this purpose: In the results table, click on the Kappa symbol to begin the calculation for the analysis currently underway. MAXQDA will display the following results table: 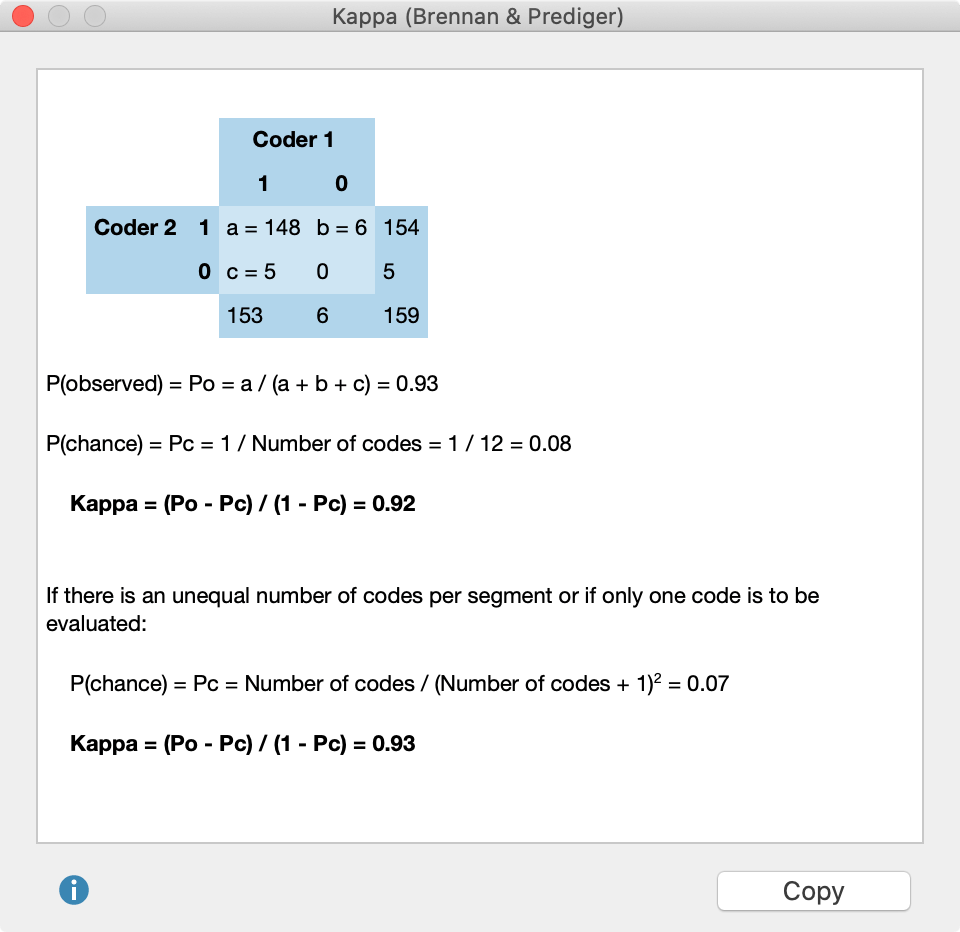 The number of codes that match is displayed in the upper left corner of the four-field table. In the upper right corner and the lower left corner you will find the non-matches, meaning one code, but not the other, has been assigned in a document. In MAXQDA, the intercoder agreement at the segment level takes into account only the segments to which at least one code has been assigned; therefore the cell on the lower right is, by definition, equal to zero (as document sections will be included in the analysis only if they are coded by both coders).

“P(obersved)” corresponds to the simple percentage of agreement, as it was displayed in the “Total” line of the code-specific results table.

For the calculation of “P(chance)”, or chance of agreement, MAXQDA employs a proposal made by Brennan and Prediger (1981), who dealt extensively with optimal uses of Cohen’s Kappa and its problems with unequal marginal sum distributions. In this calculation, the random match is determined by the number of different categories that have been used by both coders. This corresponds to the number of codes in the code-specific results table.

Prerequisites for the calculation of randomly corrected coefficients such as Kappa

For the calculation of coefficients such as Kappa, segments usually have to be defined in advance, and are provided with a predetermined set of codes. In qualitative research, however, a common approach is that not to define segments a priori, but rather to assign the task to both coders of identifying all document segments that they view as relevant, and to assign one or more appropriate codes. In this case, the probability that two coders code the same section with the same code would be lower, and hence Kappa would be greater. One could also argue that the probability of randomly occurring coding matches in a text with multiple pages and multiple codes is so insignificant that Kappa corresponds to the simple percentage agreement. In any case, the calculation should be carefully considered.