Quite often, teamwork starts as follows: researchers work on the same data in parallel – each on their own project file on their own computer. One person only assigns selected codes to the data, for example, the other only processes selected documents. Both use already existing codes and add new codes, write new memos, paraphrases and summaries. In these cases, MAXQDA allows you to transfer the codes, codes, memos etc. from one project file to another.

Of course, this teamwork presupposes that everyone is working with the same data material. To make sure this is the case, it is best to import the existing data (e.g. documents, variables, interview notes as memos etc.) into a MAXQDA project file on a computer and then distribute the project file to all team members. Of course, it often makes sense to define already fixed categories as codes in the “Code System”.

Please note: The team members can change the order of the documents in their project files and also add further documents. Transferring color assignments to documents is also straightforward. However, you should neither change document names nor edit the imported texts.

In principle, we are dealing with the following situation, where for the sake of simplicity in the example we are assuming that we are working with only two MAXQDA projects. The procedure is basically the same with three, four or more files. 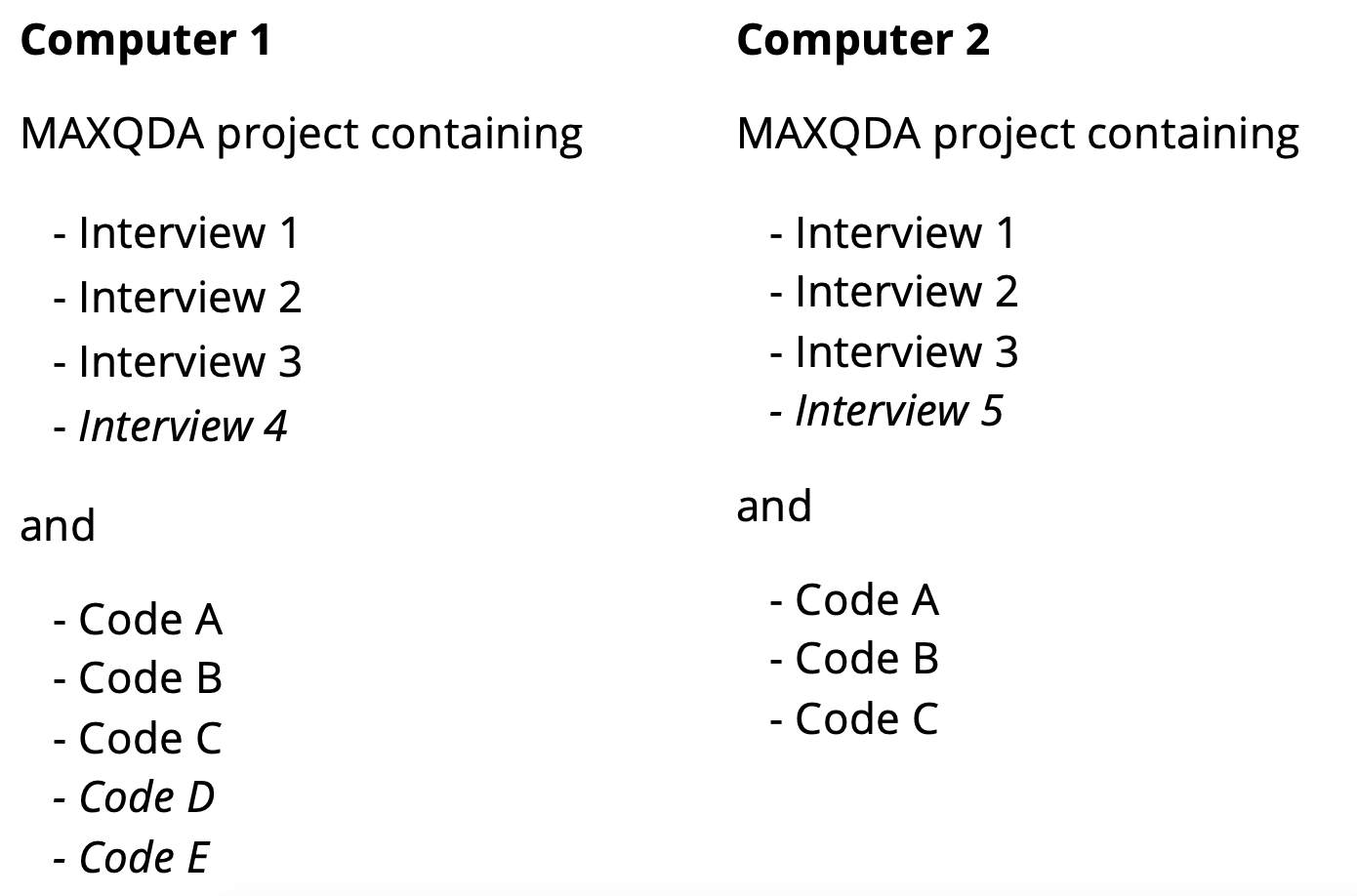 In the example, interview 4 is only available on computer 1, interview 5 only on computer 2. The set of documents does not have to be completely identical in the sense that all documents of one project must also be available in the other.

Neither does the code system have to be identical. Though, of course, in a research group you should make sure that the same category, i.e. the same code, always has the identical name and hasn’t been given a different name by different team members.

Tip: Of course, the projects don’t have to be stored on different computers. It is not a problem if they are stored on the same computer.

How does the transfer process work?

This it how it works in MAXQDA: colleague 1 exports all the relevant information to be transferred from their project file into a MAXQDA exchange file with the extension “MEX” and sends this file to colleague 2. Colleague 2 then imports that information into their own project file.

You will recognize a MEX file by the double arrow in the file symbol and by the file extension MEX. The abbreviation MEX stands for MAXQDA EXchange format.

A dialog box will then appear in which you can select the following options a step at a time.

Select your codes and documents

After clicking on Next >> a dialog box for the code selection will appear. At the bottom, you will see how many codes are currently selected and how many coded segments occur in the previously selected documents. 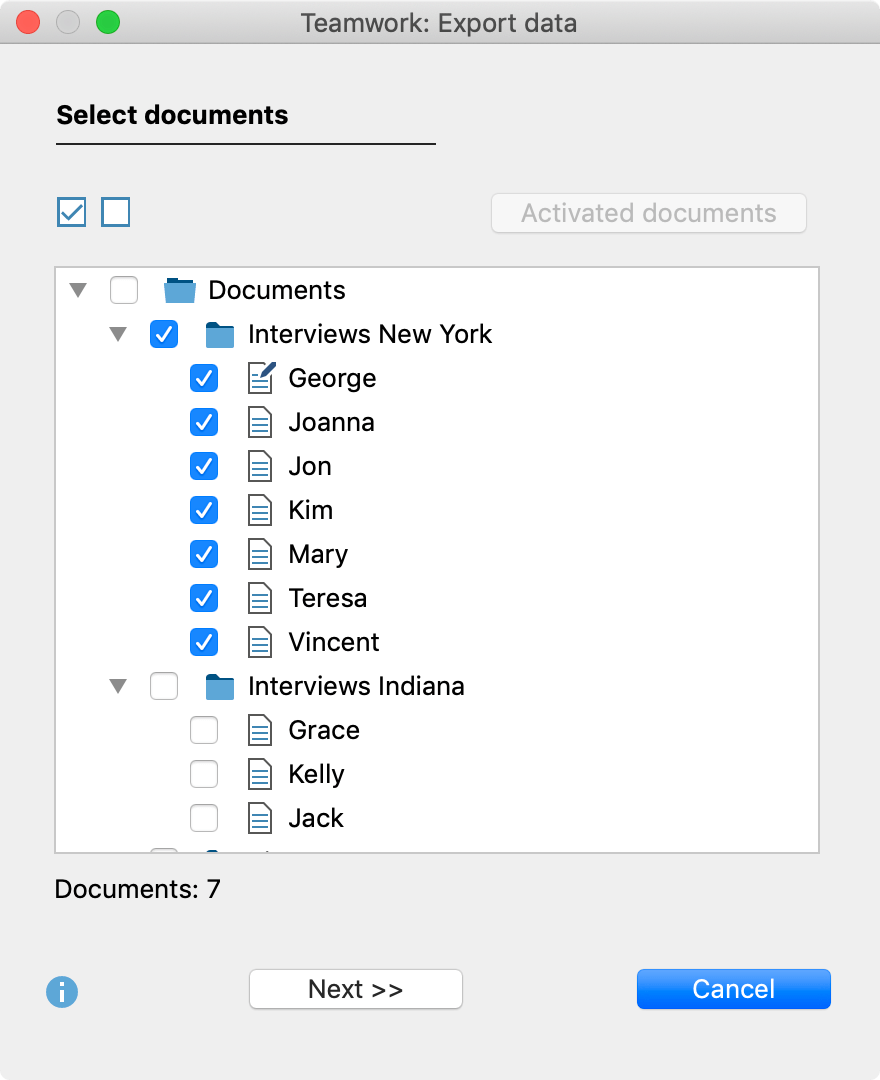 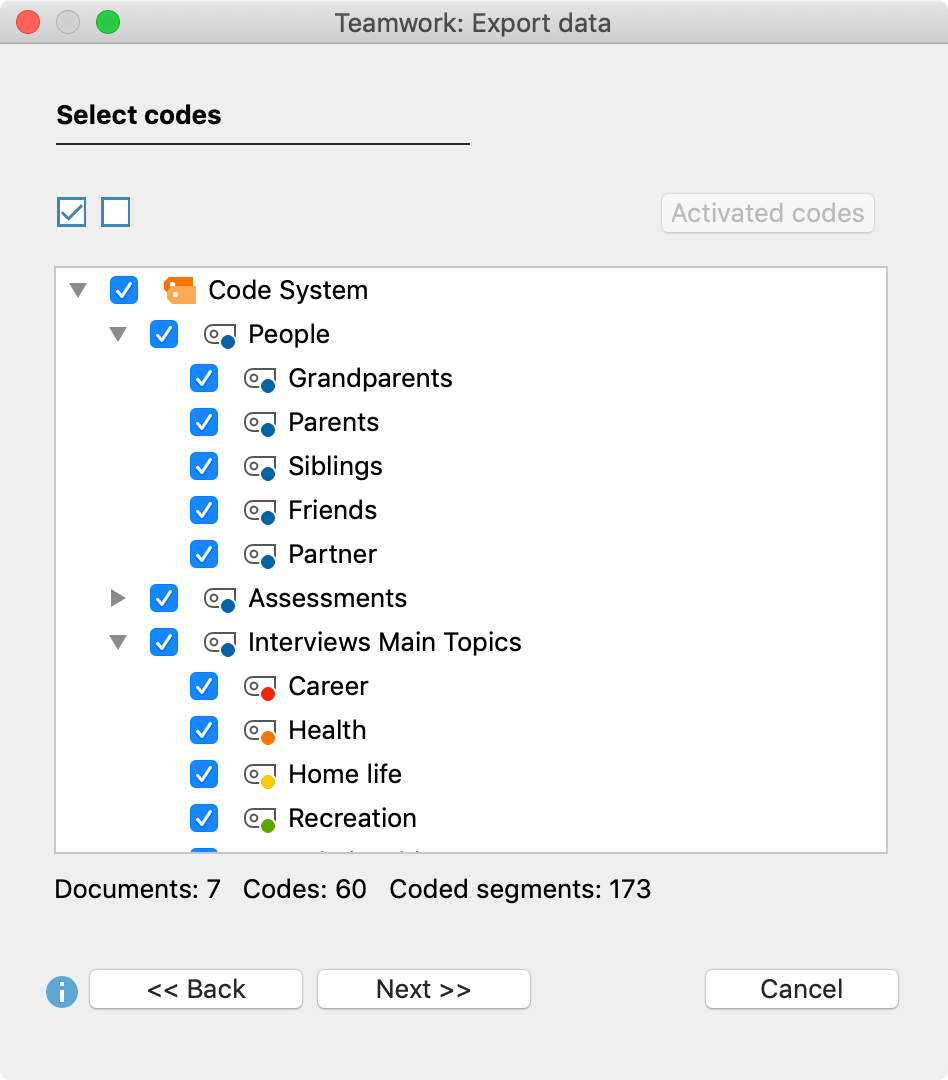 Assign a file name and select a storage location.

Clicking Next >> will assign a file name and select a storage location. MAXQDA will then export all the data (codes, code assignments, memos, variables, summaries, paraphrases etc.) of the selected documents into the export file.

Importing the exchange file into the target project

You can import the exchange file data into any MAXQDA project that has the same text (in this example “Interview 1”).

Select Teamwork > Teamwork Import: Import Data from Exchange File in the Home tab. A dialog box will appear that guides you through the import process a step at a time:

Please note: Before MAXQDA starts the teamwork import process, a backup of your opened project’s status is automatically saved to your backup folder. The import process cannot be reset by clicking on the Undo arrow in the upper right corner of the window.

When importing a code, it may happen that the same code has already been assigned to the corresponding segment. This segment may also have other segment boundaries than the code you want to import. Since the rule in MAXQDA is that a segment in a document can only be coded once with the same code, you can use the pop-up menu to specify which segment boundaries should “win” during import process:

Each code assignment in MAXQDA also includes a comment and a weight. In the event of a conflict, you can instruct MAXQDA whether the existing comments and weights should be retained or overwritten by the imported ones:

When importing summaries, you can also control how MAXQDA should proceed if a summary already exists for a document in a code:

What exactly happens during the import process?

Start your teamwork in the “Document System”

You can also start the export for a document, document group or document set directly in the “Document System”. To do this, right-click an entry and select Teamwork > Teamwork Export: Export Data to MAXQDA Exchange File from the context menu. 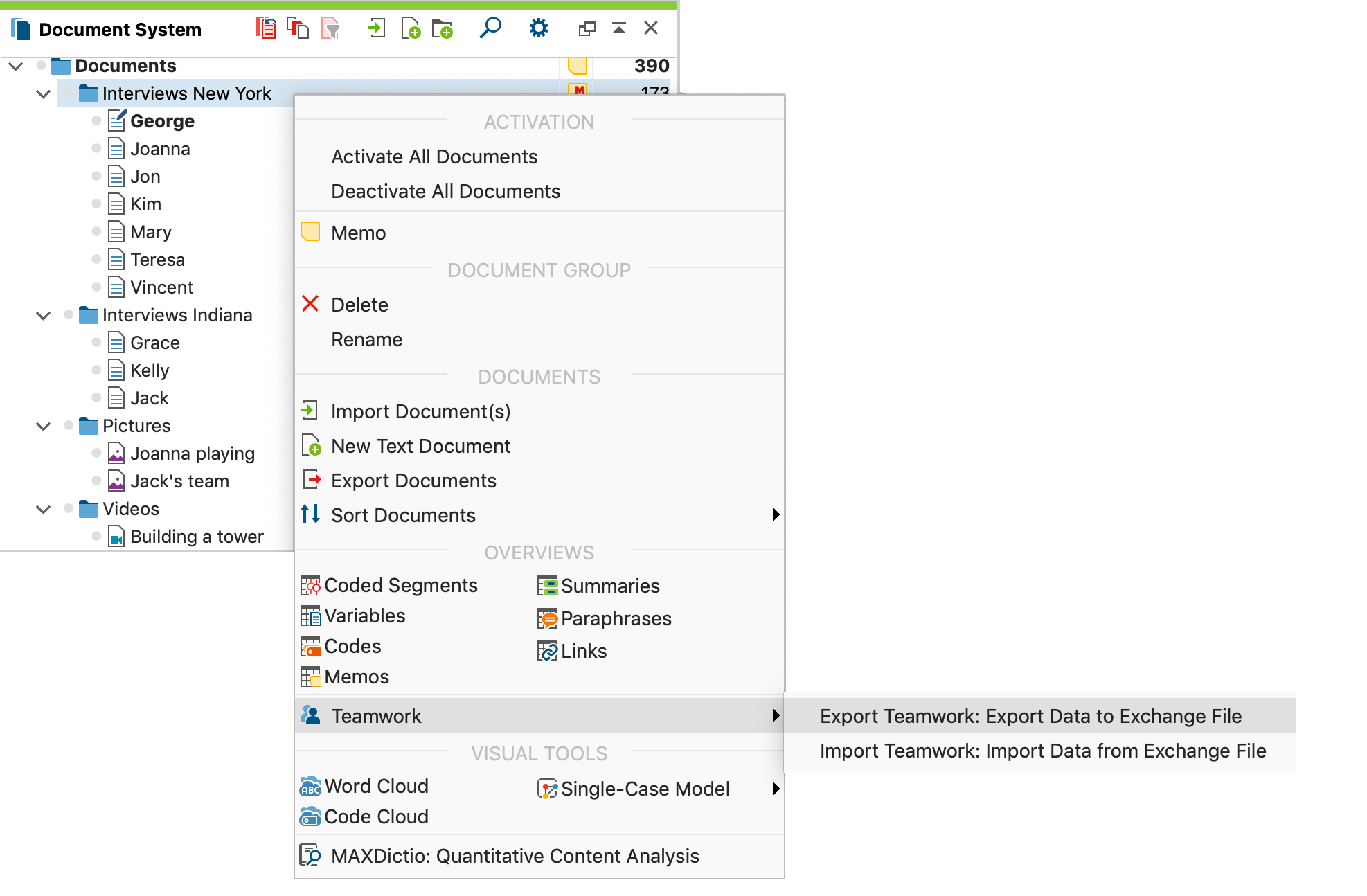 In the picture you can see that you can open the complementary function Teamwork Import for a document, a document group or a document set directly in the “Document System” context menu.