The “Overview of Focus Group Participants” provides important information about the individual speaker, such as the number and scope of their respective contributions, and also allows you to store additional information about each speaker in the form of variables. To access the overview, right-click on a focus group in the “Document System” and choose Overview of Focus Group Speakers.

The following window will open:

The first two columns are used to identify the participants and their respective focus group transcript. The percentages of contributions and the characters always appear in the displayed table. If you have assigned a particular color to a participant, it will appear in the first column of the table.

In top of the window are several icons, whose special functions in relation to the focus group analysis are explained here:

Only activated focus group speaker – Reduces rows to those of participants activated in the “Document System”. This is especially handy if you want to exclude Moderators from the overview: Activate only the other participants and click the icon.

Statistics – Presents the values ​​of all the columns displayed in a frequency table or chart, excluding the “speaker” and “focus group” columns. More information on frequency tables and charts can be found here.

Data Editor – Turns on the Variable View, in which the variable values are visible.

List of variables – Switches to Variable View, where you can define new variables and adjust and edit existing variables. More information on the use of variables in focus group analysis is provided in the next section.

Tip: You can call up the summary table not only for individual focus groups transcripts, but also for the participants of all the focus groups in the MAXQDA project. To do this, right-click at the top level in the “Document System ” with the mouse and select the appropriate entry. A corresponding overview is also available in the context menu of an individual participant, referred to here as “Overview of speaker variables”.

You can store background information for each participant in a focus group for selective analyses and comparisons; for example, comparing the statements of older and younger participants. First open the “Overview of focus group speaker” from the context menu in the “Document System” (either at the top level for all focus groups in the project, or at the level of a single focus group).

Tip:You have direct access to the speaker variables via the Variables tab. Click on List of Speaker Variables to open the “Overview of Focus Group Speakers” table which contains every speakers from all focus group documents in your project.

As seen above, the default overview contains multiple columns of information that MAXQDA compiles for the participants. You can add more columns for information such as, for example, age, profession, or professional rank.

Adding new variables is done in the same way as in other overviews of variables in MAXQDA:

A new window will appear, in which you can define the name and type of the new variable. 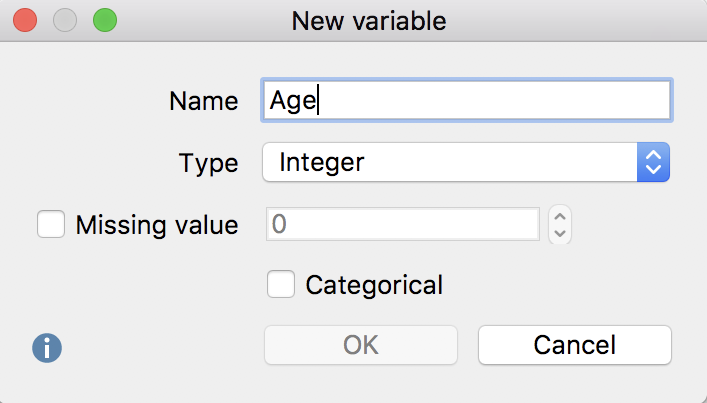 After clicking OK, you will see that a line has been added with the newly added variable in Variable View.

Entering values for the participants

Overview of focus group speakers to return to the normal view. On the far right you will see a newly added column, in which you can enter values for each participant. The editable column can be easily recognized by its blue column heading, unlike the black headings of the columns automatically generated by MAXQDA.

The variable values for participants can be used:

MAXQDA can import speaker variables from XLS/X files. The data must be organized as follows:

The first and second column serve the unambiguous assignment of variable values to a speaker, so these columns and their headings are mandatory. Each line must designate a speaker and the corresponding focus group in the corresponding column.

Only when a speaker, who matches this information exactly, is found in the “Code System” will the variable be imported. You can add as many variables as required in the subsequent columns.

After preparing and saving the import data, you can then start the import procedure by going to Variables > Import Speaker Variables. Alternatively, you can click on the

Import data button in the Overview of Focus Group Speakers.

A dialog field appears in which you can specify the source and target variables along with the type of variables to be imported.

MAXQDA does the following during the import:

Tip: An easy way to set up an Excel file for importing new values is to first export the variable data matrix as an Excel file by clicking on the Excel icon in the toolbar of the variable list. An Excel file with all of the current variables will open up, and you can then add new columns for new variables and update variable values that you want changed. All you have to do after that is save the Excel file and import it into MAXQDA.
<![endif]-->
We use cookies to improve your experience on our website. By clicking OK or by continuing to browse the website, we’ll assume that you are happy with their use. Click here to review our Cookie Policy. OK