In the following example, the “Code System” contains four codes (A, B, C and D).

To move Code D to the top of the list, you would need to do the following: Click on Code D and drag it in front of Code A while holding down the left mouse button, then, when a line appears, drop the code.

Subcode can be sorted in ascending and descending order by name and by frequency, by right-clicking the parent code and selecting Subcodes… > Sort from the context menu.

A common procedure when working with codes is to group previously defined codes under a new, more abstract category, as shown in the next diagram:

MAXQDA’s hierarchical “Code System” makes it easy to group existing codes under new top-level codes. Reorganizing the “Code System” can be done at any time during the analysis process:

Often when working with a code system, it is desirable to differentiate between elements grouped under one code. In MAXQDA this corresponds to dividing a code into two or more subcodes. For example, imagine you have created a code named “Family” and have assigned document segments, in which an interviewee talks about his family, to this code. Then imagine that it becomes necessary to differentiate between “Mother”, “Father”, and “Siblings”.

This differentiation of a category does not work automatically, but requires that each segment previously coded under “Family” is re-read by the researchers and assigned to one of the three new subcategories. This can be done particularly conveniently in the Smart Coding Tool, which was specifically designed for this purpose.

Codes can be divided as follows:

Tip: If you hold down the Ctrl key (Windows) or the command ⌘ key (Mac) during this operation, the encoding is copied from the source code to the target code and remains in the parent code.

Alternatively, you can click on the document name below a segment in the “Retrieved Segments” window in step 4 to display the segment in the “Document Browser”. There you can code as usual, i.e. by clicking and dragging with the mouse and assigning the desired subcode. With this procedure, however, the old codings in the upper code are still retained, i.e. all segments still have the assignments to the code “Family”.

However, this is normally not the intention – the old encodings of the parent code must be removed. You can double-click on the parent code to list its encodings in the “Overview of Coded Segments”, select all encodings and then remove them by clicking on the delete symbol in the toolbar.

It is often necessary to combine two or more codes that capture something similar in the data material into a single code. 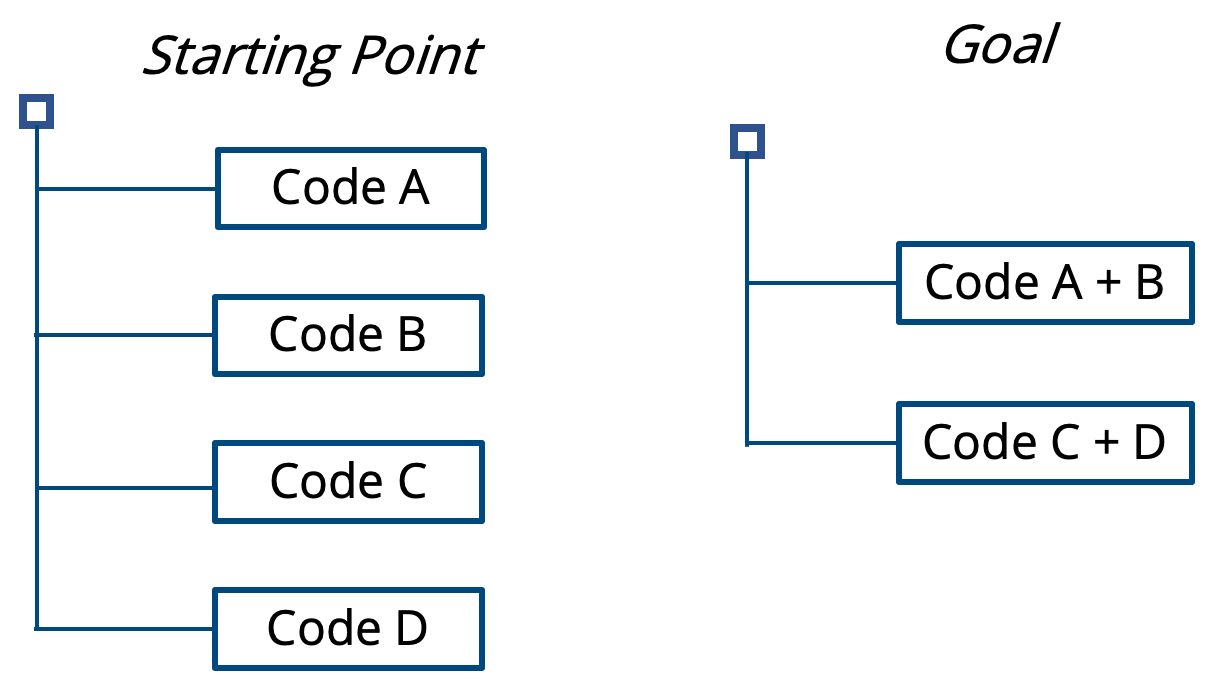 Merging two codes with the mouse

For two codes, this can be done very easily via drag & drop: Click on the code you want to merge with another code and drag it to the highlighted word “Merge” that appears to the right of the target code and release the mouse cursor on that word.

As soon as you release the mouse button on the word ” Merge “, MAXQDA moves all encodings of the source code into the target code and deletes the source code. In the example, the coded segments of Code C are added to the segments already existing in Code D. The code C is then deleted.

To indicate that the segments of another code were inserted into a code by fusion, a plus sign in brackets “(+)” is added after the target code.

Please note: If you merge a code that has subcodes with another code, the subcodes are attached to the target code. It is not possible to merge a parent code with one of its subcodes.

You can also merge several codes at once at any time: 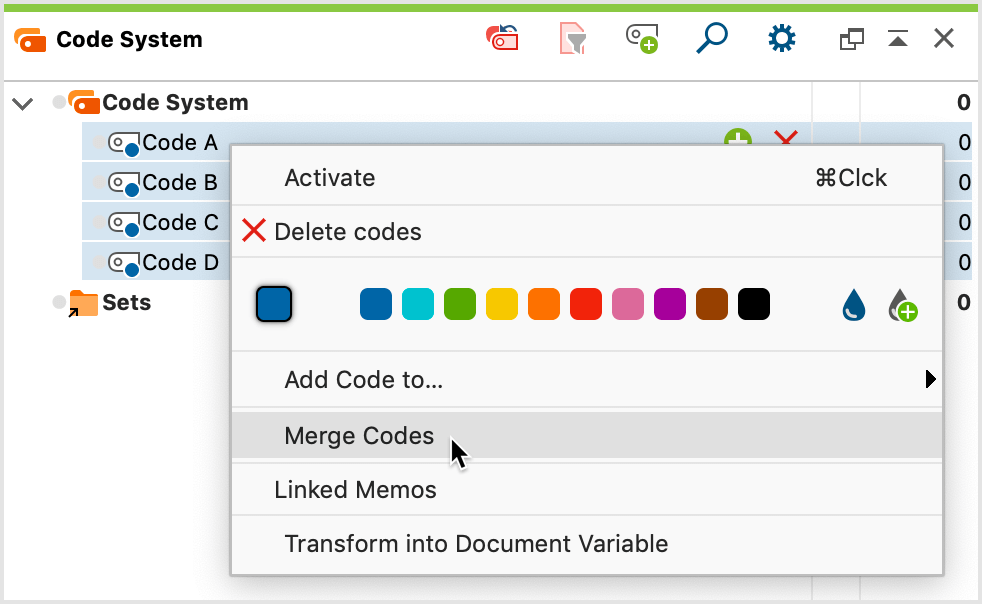 In MAXQDA each code can have only one code memo, so the question arises what happens with the code memos of the codes that are being merged: