You can add new variables to both the “List of document variables” and “List of code variables”: 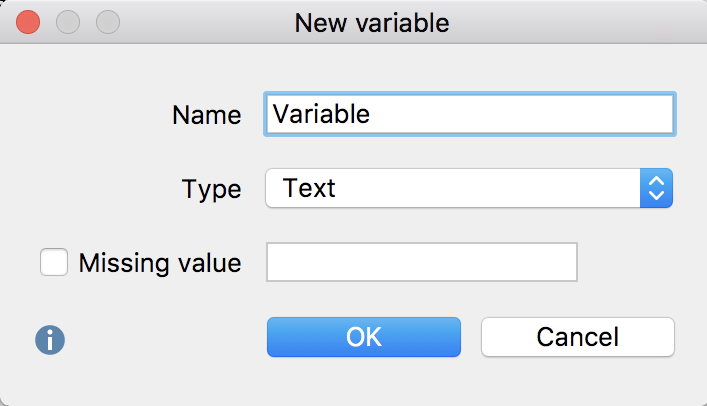 When creating an integer variable, you also have the option of defining whether it is a metric or a categorical variable. The variable for age, for example, can be handled in various ways: if you want to enter the age in years, you are dealing with a metric variable, for which you may want to establish a mean. If you have defined ages into categories (e.g. 1 = under 18, 2 = 18-30, 3 = 31-50, 4 = 51+), then you are dealing with a categorical variable, for which you would not want to find a mean value.

The number of document variables is not limited in principle, that is, variables can be removed from the list or added to the list at any time. This applies to document variables as well as to code variables. By clicking on the New variable button, you can mae new definitions. In the event that you want to define a large number of variables and, if necessary, the values for the cases already exist in a table-like structure or even as an SPSS record, you can save time by importing the file.

Tip: To avoid confusion, each variable name should be assigned only once. Statistics programs often don’t allow duplicates anyway.

Deleting a variable is done in the same way as renaming it. Select the variable you want to delete with the mouse. Now the focused variable is highlighted in green. Then click the Delete variable

button in the toolbar. When you delete a variable, the whole column including all its values will be removed from the table.