In the following example, the “Code System” contains four codes (C, B, A, and D).

To move Code D to the top of the list, you would need to do the following: Click on Code D and drag it in front of Code A while holding down the left mouse button, then, when a line appears, drop the code.

Subcode can be sorted in ascending and descending order by name and by frequency, by right-clicking the parent code and selecting Sort subcodes from the context menu.

A common procedure when working with codes is to group previously defined codes under a new, more abstract category, as shown in the next diagram:

MAXQDA’s hierarchical “Code System” makes it easy to group existing codes under new top-level codes. Reorganizing the “Code System” can be done at any time during the analysis process: 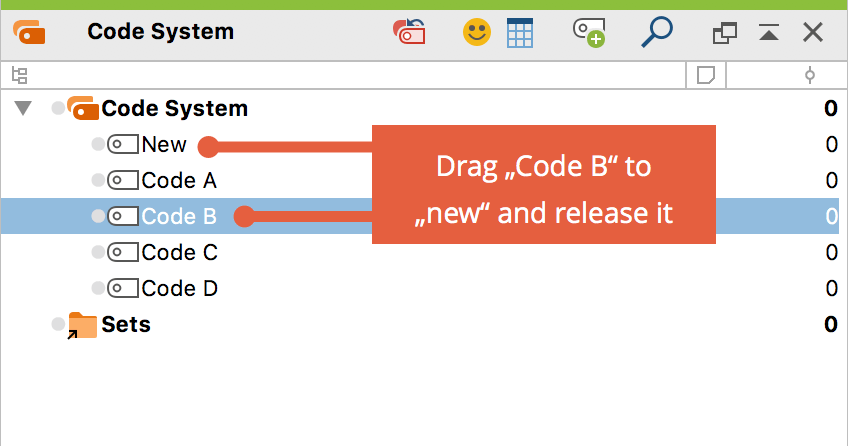 Often when working with a “Code System,” it is desirable to differentiate between elements grouped under one code. In MAXQDA this corresponds to dividing a code into two or more subcodes. For example, imagine you have created a code named “Family” and have assigned document segments, in which an interviewee talks about his family, to this code. Then imagine that it becomes necessary to differentiate between “Mother”, “Father”, and “Brothers&Sisters.”

The division of a code into subcodes can obviously not happen automatically because you must decide which references of the code are to be placed in which subcode. You must read each coded segment and decide which of the subcodes is appropriate. In this case, the subcodes will not be exclusive since a person could talk about his father and his mother in the same segment.

Codes can be divided as follows:

A convenient way to separate the code references into the new subcodes is to bring all the coded segments (in our example with “Family”) into the “Retrieved Segments” window. Then, beginning with the first segment, click the information box left of the segment for each segment. After having decided which subcode the segment belongs to, you can assign the segment to the appropriate subcode as follows: