To import a focus group transcript to MAXQDA, select Focus Group Transcripts in the Import tab. Alternatively, this function is available in the context menu at the top level of the “Document System”. The transcript can be stored in all MAXQDA readable text formats, which include DOC/X, ODT, RTF and TXT.

Let’s take the following interview with multiple participants as an example:

Following a successful import, MAXQDA opens the transcript immediately in the “Document Browser”, and from the coding stripes in the margin you can see that the speech contributions have already been coded. During the import MAXQDA creates a new document in the “Document System” with the filename of the transcript. This document has its own symbol, which allows you to immediately recognize that it relates to a focus group. Below the document, the participants of are listed individually, with the number at the end of the line indicating the number of contributions. The participants are attached to their transcripts. If you move the document, the participants will move with it. Only the order of participants can be adjusted with the mouse. Like other documents, focus groups documents can be assigned to a document group or set. 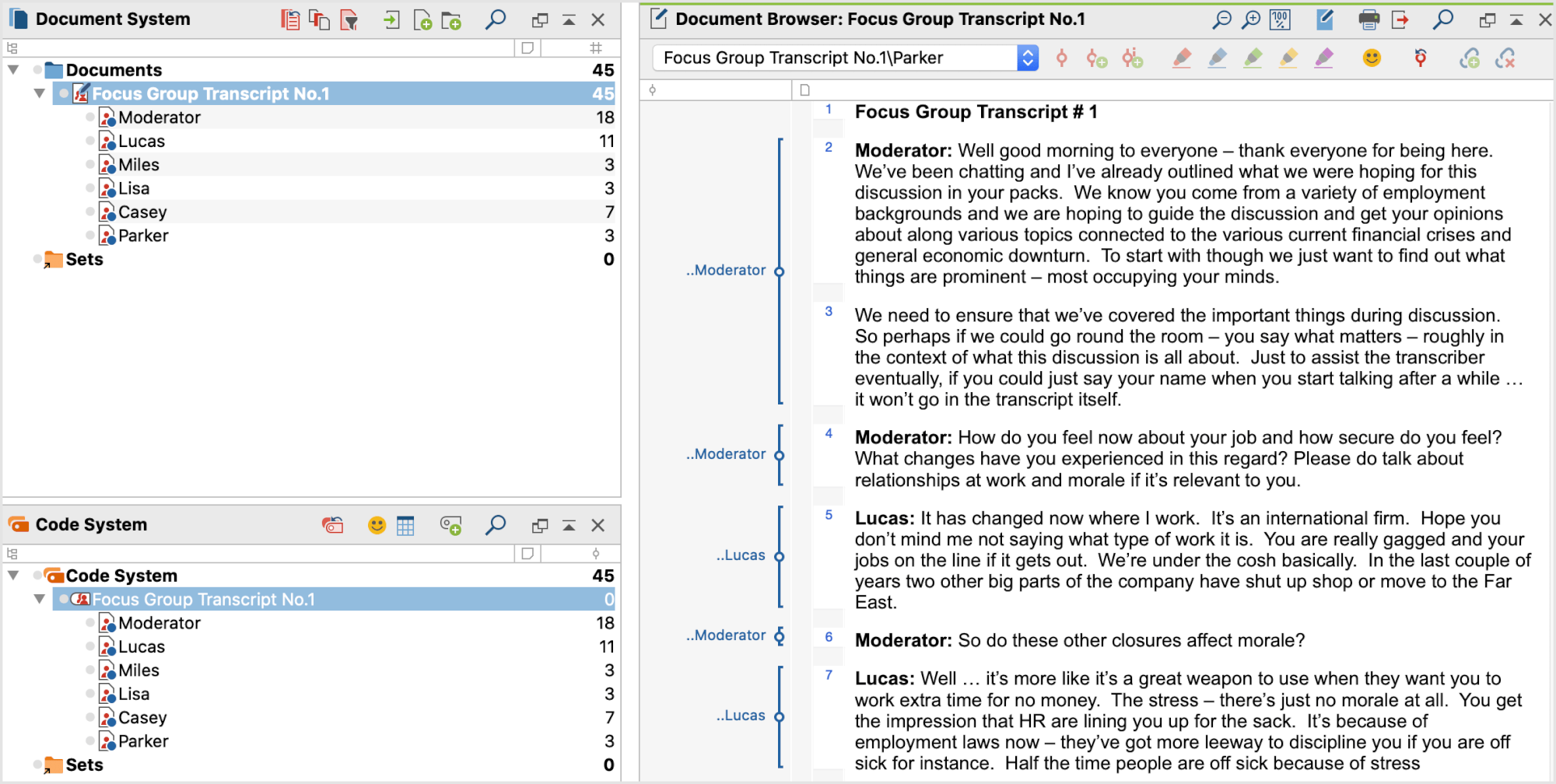 In the “Code System” you will see a very similar listing: At the top of the Code System a code with the name of the imported data will appear, with the participants listed as subcodes, and the same

The fact that the participants are available both in the “Document System” and in the “Code System” opens up extensive possibilities for the analysis, as the participants can be activated as independent codes and as document subsets.

Tip: After importing the transcript you should check the names of the participants for typographical errors. This will avoid frustration later, in the case that the same person appears twice under different names because the name was written or spelled differently. Since the participant code cannot be deleted, you would have to make the appropriate modifications in a word processing program and then import the transcript again.

When you import multiple transcripts, a unique code will be assigned to each focus group along with subcodes for the respective participants. The top-level codes can be moved within the same Code System, but the participant codes are firmly attached to their top-level code, and their order can be modified only under this top-level code.

Tip: The automatic coding function for participants may be useful for other types of documents in which multiple individuals interact, for example forum discussions or comments on YouTube videos.

Converting an already imported text into a focus group transcript

Sometimes you realize that it would have been better to import a text as a focus group transcript into MAXQDA after you have already imported and coded it as a normal text document. In this case you can use the function Convert Text>Insert Displayed Text as a Focus Group Transcript, which is available in the Import Tab. First, open the relevant document and then start the function. MAXQDA will insert a copy of the text as a focus group document: