From Global Goals to Local Action

City Institute Georgia (CIG) is one of the first Georgian non-profit organizations to primarily address issues concerning sustainable urban development. Its mission and work are guided by its purpose to contribute to improving the quality of life of local populations. Along with local experts and respected research institutions, the organization partners with several leading international and advisors. Based on this outstanding profile and expertise, the CIG has already completed many fruitful projects, including the Tbilisi General Land Use Master Plan and the Efficiency Analysis of Transport Solutions in Tbilisi Centre, among others.

This article will showcase one of the ongoing urban planning projects of the CIG, related to the completion of a “Basic Plan” for the city of Gori in eastern Georgia, which will serve as a strong foundation for the city’s forthcoming “Master Plan”.

The 21st Century era has raised unique challenges for urban settlements and the development of many cities around the world still hinges on outdated urban planning approaches. Urban planning is often hindered by poor planning trends, which serve as the utmost barriers to development and divorce global goals from true localization. Despite the fact that many international policy documents such as the Sustainable Development Goals (Goal 11 – Sustainable Cities and Communities), New Urban Agenda (Habitat III), EU/Georgia Association Agreement, etc., outlined guidelines for inclusive and sustainable development, the real obstacle of how to execute global or national objects on the local level remains.

Every settlement is a dynamic organism, shaped by centuries of events that create distinctive characteristics and form vibrant destination-specific identities. These historical details make the transformation of global principles into local solutions even more difficult.

The city for which CIG is developing the basic plan is located in eastern Georgia and serves as a connecting highway between the country’s western and eastern regions. In 2008, Gori was a battleground in the five-day Russian-Georgian war, causing displacement of the local population. As a result, large-scale settlements for internally displaced persons had to be constructed both within the city and in its surrounding area.

As researchers of the CIG, our main mission has been to sort the priorities and challenges for the selected city in a way that the globally-promoted urban principles would be combined with local particularities. After a thorough analysis of possible methodological approaches to achieve the stated aim, we realized that there was a lack of existing tools. In order to fill the gap, we have devised the Five Steps Prioritizing Method for urban planning issues in the case of Gori.

This Five Steps Prioritizing Method encompasses well-established methods, including Systematic Review, Evaluative Qualitative Text Analysis, and Transformative Mixed Methods Research Design. MAXQDA has been a valuable tool for integrating all of the necessary features and different forms of analysis innovations in order to execute this new approach.

Principles of Systematic Review helped greatly to fulfill the first phase of the Five Steps Prioritizing Method. Following discussions with members of the research team and various stakeholders, we clearly set the scope of the research – thorugh a prioritization of issues concerning the complettion of the Basic Plan, which itself will serve as the foundation for the upciming Master Plan in Gori.

The structure of the code system, alongside thematic subcodes, consists of evaluative categories such as the significance of multiple effects, validation and scale of discussion. The values/levels for each evaluative category were defined in advance. For example, the validation of discussion was used to distinguish the quality of evidence (strong/weak/without proof/argumentation), on which the thematic coded passages relied.

Document variables have also been created using MAXQDA in order to summarize the information regarding selected documents. Specifically, several variables such as types of documents (policy, urban development agenda, research findings), subject (general, focused on the subject), publication date, etc., have been added to extract the information needed.

The third step was to commence the coding process. A hybrid approach was applied to this process in which several text segments were assigned to the initially developed codes/subcodes. In addition to the pre-set codes, various additional “emergent” thematic codes were established according to the visions and strategies reflected in the sampled documents. 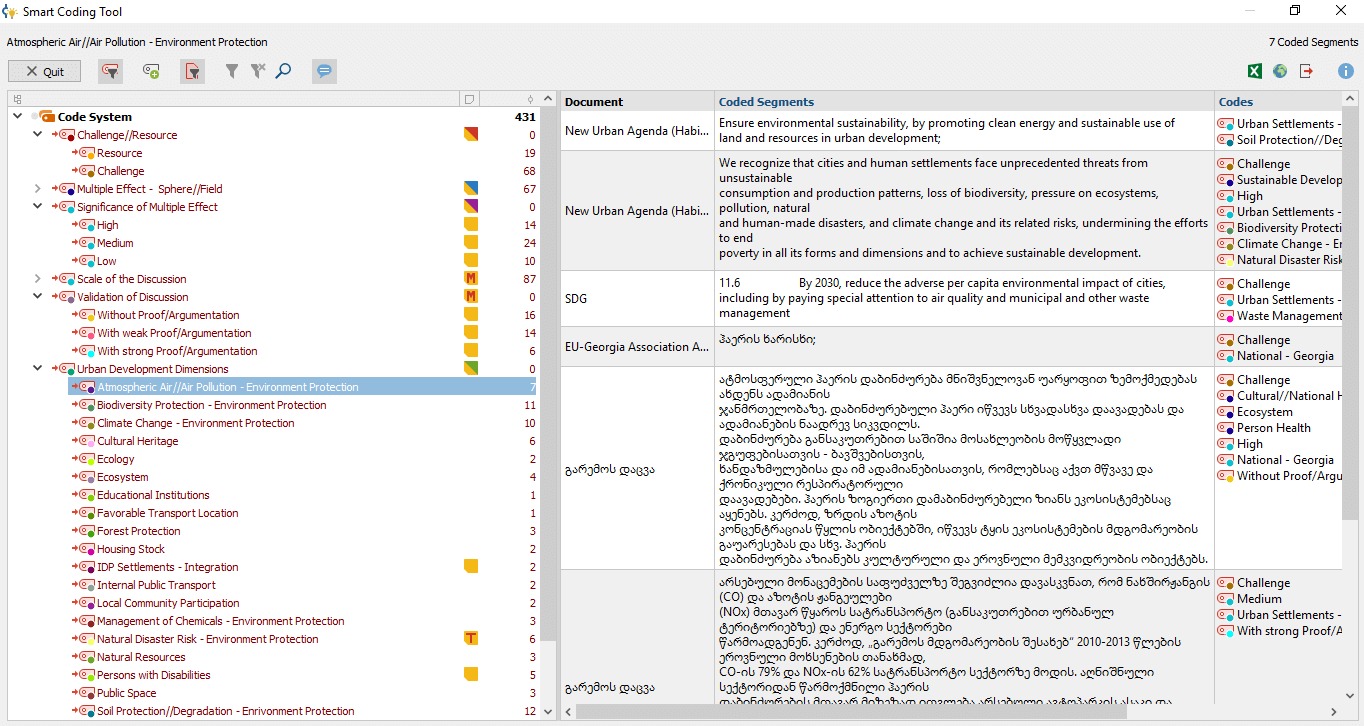 The accomplishment of the third step created a baseline for the analysis of the coded segments. To ensure the successful implementation of this process, new features of data processing and analysis provided by MAXQDA 2018 were applied. Along with other versatile data processing features, integral analysis tools such as Complex Code Configurations, MAXMaps, and the Document Portrait proved particularly helpful. Due to the fact that the proposed Five Steps Prioritizing Method puts great emphasis on both thematic codes and evaluative categories, Code Configurations were used to reveal percentages and frequencies of coded segments (urban development dimensions) linked with scale of discussion (See Screenshot #3). 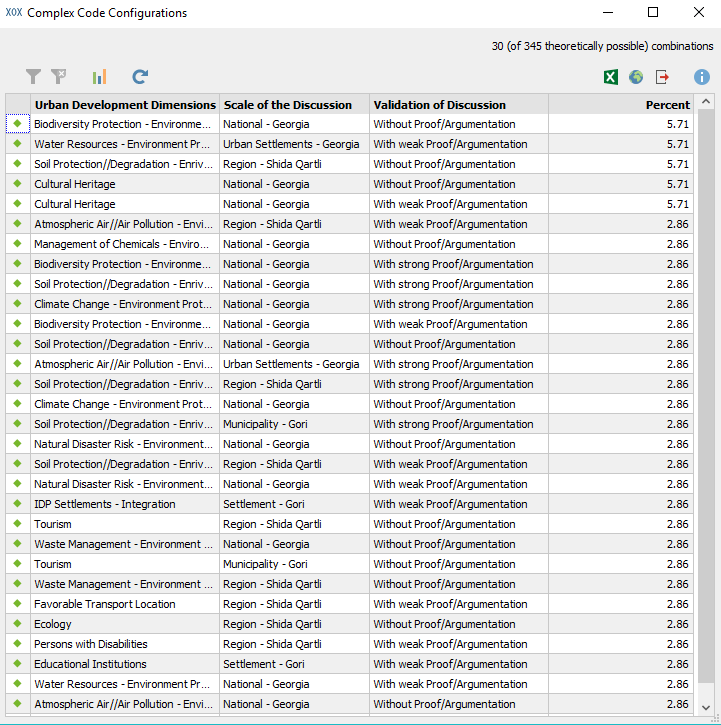 Herewith, data displayed in MAXMaps and the Document Portrait has proved to be the best way of portraying information succinctly and efficiently, illustrating details provided in longer textual information. As a result, MAXQDA 2018’s data analysis tools added life to the sampled and coded qualitative information, and successfully depicted the research findings (See Screenshot #4, #5). 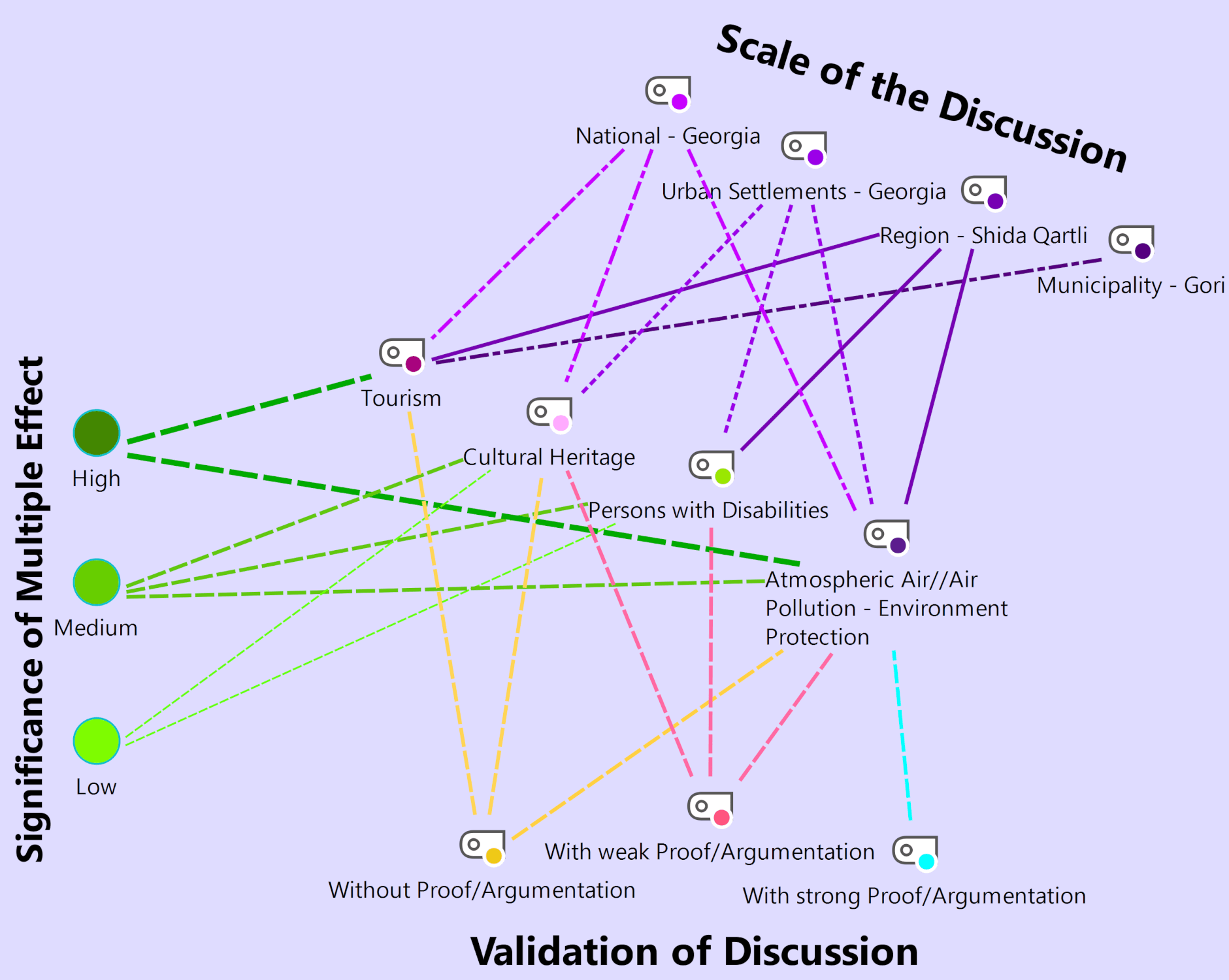 The concept of Transformative Mixed Method Research Design has been employed to prioritize the urban development dimensions for the target city of Gori. Techniques for converting textual information, in particular the quantification of qualitative coded segments, allowed us to use quantitative parameters for localization of global goals!

It is important to note that the proposed Five Steps Prioritizing Method is still in the development phase. For the advancement of the method, we are planning near-term projects to integrate Qualitative GIS principles. MAXQDA’s Geolinking feature will enable us to take geographical aspects and the particularities of urban development issues into consideration, which will encourage better localization.

The final results and findings of the ongoing research will be presented at the 2018 MAXQDA User Conference (MQIC) in Berlin.

Temur Gugushvili is a first-year PhD student at Tbilisi State University. He has long-term and continuous experience in both international and local research projects. Temur’s topical areas of interest include sustainable livelihood practices in the rural settlements within various contexts such as urbanization, tourism development, protected areas, and climate change. His academic performance has been recognized with fellowships from leading scientific institutions and societies.

Gvantsa Salukvadze is a PhD candidate in Human Geography at Tbilisi State University, Georgia. She has been actively involved in various research projects for more than three years, primarily to promote sustainable and inclusive tourism development in the mountainous regions of Georgia. Currently, she is contributing in the development of a normative scenario for sustainable land-use in the greater Caucasus with German and Georgian scholars. In the interim, she continues to excel in her in academic career at leading international universities and institutions. As a rising young professional, she has already gained several scholarly achievements and awards on both local and international levels.