In principle, organizations should be immortal.

They should outlast their founders because they have no natural diseases, don’t have limits to self-repair, and can shape-shift indefinitely to suit their needs. However, in practice, very few organizations do outlive their founders and instead wither or die at an early age.

One of the leading causes of organizational collapse and mortality is the inability to cope with shocks – a lack of anticipation for an unfolding future, and a lack of resilience to deal with the effects.

Using MAXQDA to anticipate and benefit from the future

While it is not possible to predict the future, it is essential to describe it and to imagine the various alternate futures that may unfold. Strategic Foresight research involves collecting signals, constructing forecasts, and describing alternate futures of a domain. We used a “cone of probability” that examined plausible variation in the long horizon that uses the Houston Framework Four Alternate Futures modes:

Strategic Foresight serves as an essential tool in risk identification, avoidance, and mitigation, and promotes resilience in an organization. Our alternative future-building occurs in iterative phases:

To frame the domain and build a coding taxonomy, we used MAXQDA’s ability to bubble out the “voice of the document”, and flexibility to create and merge codes. We built an initial code taxonomy using selected components of the Dublin Core that we felt would match the healthcare industry. This formed our initial coding taxonomy.

We then imported >600 customer internal policy and practice documents and dozens of industry documents and used MAXDictio’s Word Combinations function to identify frequent thematic components. The approach was that if a phrase is highly prevalent in internal documents, the document corpus “voice” is telling us what the organization most cares about.

Likewise, frequently recurring phrases in industry documents tell us what an organization in that industry probably should care about. The first 20 codes in the raw “Phrase Parent” (Figure 1) and “Single Word Parent” (Figure 2) lists are shown below. 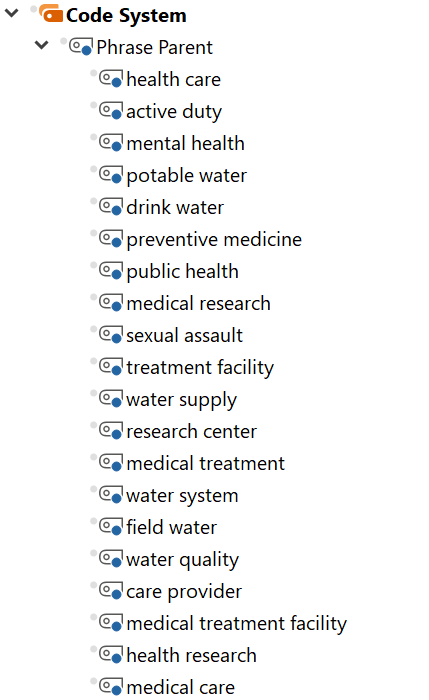 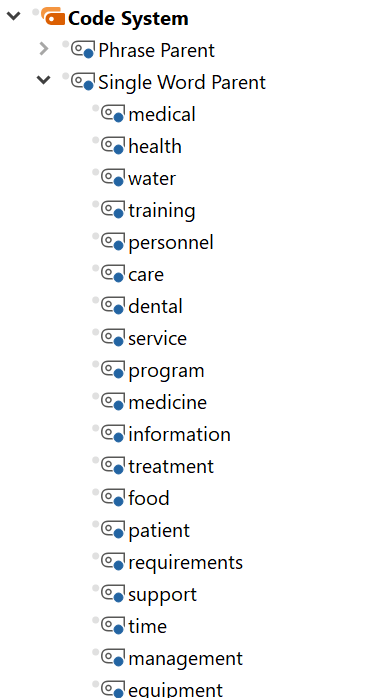 The two lists of codes represent a “Voice of the Document” specific to the customer and industry, and using MAXQDA’s MAXMaps feature, we worked as a team to perform a thematic clustering (card sorting) process to cluster, merge, or split codes, until we arrived at a first-pass code taxonomy (Figure 3). The single word and phrase lists, and selected Dublin core codes were used in this manner and sorted systematically into the “Accepted Codes” code list.

At this stage, we exported the Accepted Codes including their memos that defined each code and its scope, and then created a new project into which we imported this Framing code system. This new empty project formed the basis for the next phase.

Scanning for signals of forces of change is an ongoing and iterative process of monitoring the creation of new internal documents, industry reports, and internet webpages related or conceptually adjacent to healthcare. We trained two AI news aggregators to fetch healthcare internet pages and provide us with the headlines, lede, and URL for open sources whose message mapped to the mission or domain of the client.

From that weekly list, we visited pages that we judged to be most salient to the search for signals and used the MAXQDA Web Collector (Figure 5) to collect the most relevant signals into a Document Group for each collection week (Figure 4). Internal PDF documents were imported in the normal fashion as documents. 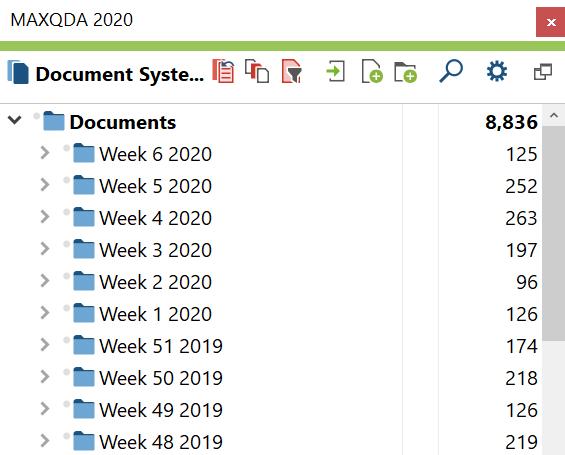 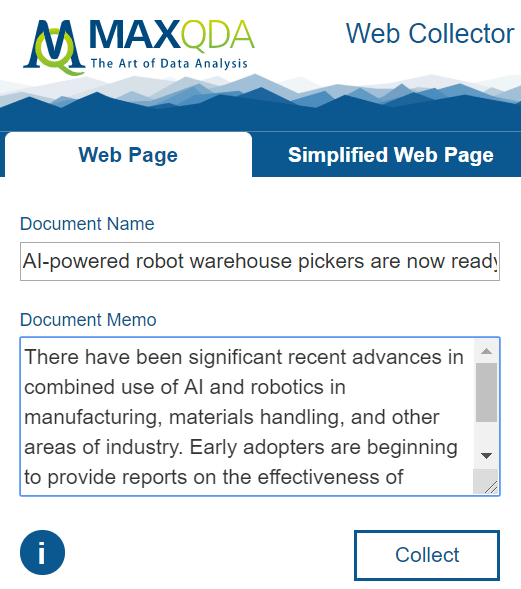 We coded the documents using the Framing taxonomy (Figure 6), and in each document memo, we inserted the story lede or paraphrase of the core “story” in the document, as well as a short analysis of the meaning and implication for the customer.

Using the experience of coding, we periodically adjusted the Framing code system, and again split, merged, added new codes, or deleted obsolete codes. Having the analysis and lede in the document code allowed an easy way to export the list according to whatever criteria as desired, and to support analysis by placing all the key details in one convenient location that could be sorted, searched, and annotated.

This output combined with the use of MAXQDA’s Code Matrix Browser function allowed for export into Excel sheets that were filtered to support analysis of Forces of Change and to provide materials for the later Scenario phase.

We used the coding from the previous phase (Figure 7) and MAXMaps to develop visualizations of Forces of Change, also known as “drivers of change” (Figure 8). Signals of change, especially weak signals, were combined to form emerging issues.

Using MAXMaps allowed the team to work collaboratively in fleshing out the relationships between each level, and with other forces of change, in order to build realistic scenarios. MAXMaps also enabled the team to interactively build out multiple levels of separation, with the codes forming the first three or four levels of detail, and brainstorming around the signal details and clusters developing several more levels.

Foresight professionals describe the future as a set of alternatives (with scenarios as specific instances) rather than as a single-valued prediction (Bishop, 2011). Using this multiple-outcomes approach, we modeled the future in a way that falls within a plausible range of alternatives. Since all the core work had been done with MAXQDA, the Alternate Futures codes already existed in a form that could be used for qualitative analysis of coded segments (Figure 9) to describe and document potential alternate futures, and to export lists to use in discussions with customers and other stakeholders.

Once these Alternate Futures were grouped and sufficiently documented from the materials captured in the document memos and code relationships, the stage was set to develop meaningful and robust scenarios. At this point, many foresight projects fail, because they lack the traceability back to source signals, or sufficiently robust relationships between signals, forces, and potential scenarios.

Since our studies are done in MAXQDA, we can trace a proposed Alternate Future back to the Forces of Change codes, the originating signal, and to the original document, with a memo describing the core issue, analysis, as well as who collected the signal, and who analyzed it. This allowed the discussion to include the original analysts, as well as the timing and the signal content.

This process created a thick account of each Alternate Future that enabled very rich and understandable scenarios.

We used Alternate Futures Coded segments and MAXDictio’s Interactive Word Tree and Keyword in Context functions to help develop rich scenarios in which the alternate futures would potentially manifest themselves. The team used images captured from the collected documents, and own artwork to draw up storyboards of how the scenarios might develop, and where there were potential points of influence. As an added feature, the team could build “artifacts from the future”, which are graphic compositions, or physical objects representing key technologies or effects of the chosen scenario.

These scenarios enabled the customers to visualize the Alternate Future in great specificity and in a way that allowed them to mentally explore the space. They could also understand how this may be a threat or an opportunity, and how they might react or plan to mitigate or prevent it, in the case of undesirable scenario, or to plan or prepare to seize opportunities in desirable scenarios.

The Strategic Foresight methodology and use of MAXQDA have proven to be highly effective and efficient, and are now an integral part of our core healthcare improvement business, integrating Monitoring & Evaluation, Quality Management, and Process Improvement with Strategic Foresight to increase customer resilience to shocks, and agility to embrace opportunities.

The culmination of a orderly process of signals, forces of change, alternate futures, and finally, scenarios with imaginable artifacts, help to guide the customer into modes of thinking that make the alternate future tangible and imaginable, and which enable them to make current decisions that enhance the likelihood that the desired future will unfold. Likewise, the thought process makes the customer organization more flexible in its thinking, and more able to build resilience to future shocks. 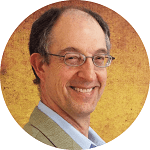 Matthew Loxton is a Principal Analyst at Whitney, Bradley, and Brown Inc. focused on healthcare improvement, serves on the board of directors of the Blue Faery Liver Cancer Association, and holds a master’s degree in KM from the University of Canberra. Matthew is the founder of the Monitoring & Evaluation, Quality Assurance, and Process Improvement (MEQAPI) organization, and regularly blogs for Physician’s Weekly. Matthew is active on social media related to healthcare improvement and hosts the weekly #MEQAPI chat. You can also read other guest posts by Mathew Loxton on Mixed Methods Research here in the MAXQDA Research Blog.