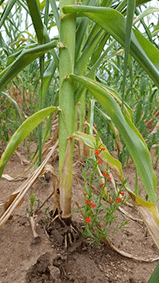 This is the first blog post about my research conducted with MAXQDA identifying socioeconomic drivers that obligate (or discourage) Malawian farmers to employ parasitic weed (Striga spp.) control practices. The study focuses on analyzing food security issues with an agro-ecosystems approach. That is, it analyzes the biological implications (i.e. parastic growth) for implementing a practice and its socioeconomic drivers. The findings hope to inform how, when, and if weed control interventions should be used in conjunction with natural and human assets to increase maize production. I am now in the final stages of a year-long study and have begun the analysis phase using MAXQDA 2018.

In the first phase of my research, an enumerator and I conducted three focus group discussions with smallholder farmers (cultivating <2ha) to assess their knowledge about Striga. Additionally, we inquired about the control practices (CPs) they used to manage the weed as well as the components considered (e.g., labor) before implementating them. The objective of each focus group was to inform a household farm survey and discrete choice experiment that would determine tradeoffs farmers were willing (or not willing) to choose a given CP. This first fieldwork diary entry deals with my initial coding and analysis of one focus group.

Over the course of my PhD, I’ve dabbled with qualitative software (e.g., NVIVO). As powerful as some can be, many are not too forgiving during the initial stages of node development. To much of an extent, this is an iterative process. For example, researchers will often create nodes they initially believe are appropriate to unveil underlying themes of a transcript, but later discover they were too broad or not detailed enough. After the text is coded, it is sometimes difficult (and time consuming) to go back, to create new nodes or sub-nodes, and recode the text. This challenge arose while I was assessing knowledge gaps between male and female farmers in Malawi.

During my initial coding, I outlined several sub-nodes of Striga knowledge (e.g., life cycle, effect on maize). As I continued coding I began to discover male and female respondents expressed the effect Striga had on their maize differently. Many female focus group participants, for example, would explain how Striga had impoverished their families (from yield loss). Whereas men would mention how Striga was “digging in their pockets”. At first, I became frustrated because I should have coded these quotes as “Faced Striga Challenges” as opposed to siphoning them into the Striga knowledge sub-node “Effect on Maize”. As you might imagine, these types of hiccups can quickly discourage a time-constrained graduate student. Luckily, MAXQDA is quite forgiving in these instances. I simply had to highlight the “Effect on Maize” and transfer the quotes into the newly added “Faced Striga Challenges” node (see the screenshot below). I was quite relieved and credit my Professional MAXQDA Trainer for pointing this out to me. The quotes will serve as powerful evidence when I use them later to explain any significant variables I might receive from running mixed logistic regression that highlights the drivers of CP implementation.

The visual tools in MAXQDA can be quite useful when deciphering different views or opinions between male and female respondents. In my case, I used the Code Relations Browser to assess whether one gender mentioned different Striga control traits they were more concerned with (see the screenshot below). In addition, I wanted to evaluate whether male farmers mentioned different components of the Striga lifecycle (e.g., germination, parasitism) more than their counterparts given their gendered roles on the farm (e.g., land preparation, not weeding). Male and female farmers often attend separate workshops due to the different times of day they are available. Findings may help agricultural extension agents curtail more appropriate training modules for different genders.

To understand whether participants had gendered views and knowledge about Striga CPs, I opened the Code Relations Browser, highlighted row nodes and indicated which column nodes they would be compared to. In my case, the column nodes were male and female, and the row codes were various topics of knowledge and Striga CP attributes. As a disclaimer, female farmers spoke more often during the focus group discussions and the analysis shown below only pertains to one extension planning area (EPA), not the entire sample. What is interesting from this preliminary analysis is how the Code Relations Browser can quickly highlight which gender appeared to be more familiar with different topics of Striga as well as the preventative controls to manage the weed.

It has been fascinating to see what themes have emerged from my qualitative data using MAXQDA. I am excited to learn and use more tools from the software’s extensive list. In the coming months, I plan to finish transcribing my focus groups and unveil the differences and similarities between each gender and EPA’s Striga knowledge-base. More specifically, I will use MAXMaps in an attempt to draw cognitive maps of each gender’s thought process behind Striga parasitism. The intention of the analysis will be to highlight gendered knowledge and views about parasitic weeds.

Editor’s Note
Timothy Silberg is a recipient of MAXQDA’s #ResearchforChange Grant. He is a PhD candidate in the department of Community Sustainability at Michigan State University, USA. His research project titled, “Parasitic Weed Prevalence – The Case of Malawi” began in May 2017 and will continue into May 2018. Stay tuned for two more fieldwork diary entries from Dedza/Ntcheu, Malawi coming soon!