MAXQDA supports various methodological frameworks, including grounded theory, by helping you collect, organize, analyze, visualize, and publish your data. This article will walk you through tools that will help you get started with your MAXQDA-supported grounded theory analysis quickly and easily.

What is Grounded Theory?

The central principle of grounded theory is that the researcher’s theories about a topic are constructed based on their data. In other words, by collecting and analyzing qualitative data, the researcher can construct a new theory that is “grounded” in that data. Grounded theory, therefore, begins with the collection of data based on a question rather than the aim to test a hypothesis.

The principles of grounded theory were articulated in 1967 by sociologists Barney Glaser and Anselm Strauss in their book The Discovery of Grounded Theory. The idea of starting with the data in order to create the theory contradicted previous methodological traditions, which mostly suggested that researchers should verify already-formulated theory during data collection.

Grounded theory is the discovery of theory from data systematically obtained from social research.Glaser & Strauss, 2009

Grounded theory remains one of the most popular qualitative methodological frameworks used by researchers today. This may be because grounded theory methodology and its application “foster seeing your data in fresh ways and exploring your ideas about the data through early analytic writing” (Charmaz, 2006). There are also many iterations of the grounded theory process, especially when it comes to coding. This article will, therefore, serve as a practical guide to analyzing data with MAXQDA rather than a methodological assessment of grounded theory itself.

In grounded theory-based analysis, the researcher generally analyzes the data as follows: finding repeating themes by thoroughly reviewing the data; coding the emergent themes with keywords and phrases; grouping the codes into concepts hierarchically; and then categorizing the concepts through relationship identification. Finally, the categories created through this process, as well as the links found between them, are used as the basis for the development of a new theory.

The main steps in using MAXQDA to analyze qualitative data based on the grounded theory methodology are what we call the ‘4 Cs’:

These steps facilitate an analysis process that gives the researcher the freedom to construct new theories instead of simply collecting data to test how well an established theory applies to the social phenomena they are studying. However, the freedom that grounded theory gives to the researcher may also be one of its biggest challenges when it is put into practice.

With no rigid structure or prescribed rules, researchers must work entirely on their own, which often leads to uncertainty about how to get the analysis process started. Grounded theory research, especially when conducted with the constant comparative method of data analysis, is “a labor-intensive task that requires the researcher to invest time in the processes of analysis and data collection” (Kolb, 2012).

As shown above, the process is much clearer when you use software. With MAXQDA, you can search for data segments as you code the data and have analytical ideas, allowing you to develop the theory in real-time! If you don’t already have a MAXQDA license, download the 30-day free trial to get started:

Coding in grounded theory can be divided into two main phases:

Don’t get discouraged! The cyclical process might seem daunting at first, but with each round of testing and ameliorating your categories using MAXQDA, your theory will become both clearer and more resilient. Remember, if you have made it this far, you are near the finish line of constructing a new theory, which could change how your topic is viewed from now on.

Tip: The Importance of Memos

How to Create Memos in MAXQDA

Memos are an integral part of any MAXQDA project, just as memo writing is an essential part of grounded theory research. MAXQDA’s intuitive design allows for flexibility in methodological approaches and supports you to be as creative as you wish to be during your research and analysis processes.

You can differentiate between various types of memos within MAXQDA that then have different roles in your analysis. In MAXQDA, memos can be attached to documents, document groups, audio and video files, etc. Memos can also be assigned to the codes themselves. Code memos often contain category definitions and anchor examples, which can clarify the meaning of the categories you create through grounded theory analysis and explain their link back to the original quotes. There is even the option to create a ‘free’ memo, which is not attached to anything other than the project.

To create a memo, double-click the memo icon and a dialogue window will appear. Name your memo and add the text. The ‘Author’ and ‘Creation date’ fields are filled-in automatically to help save you time. 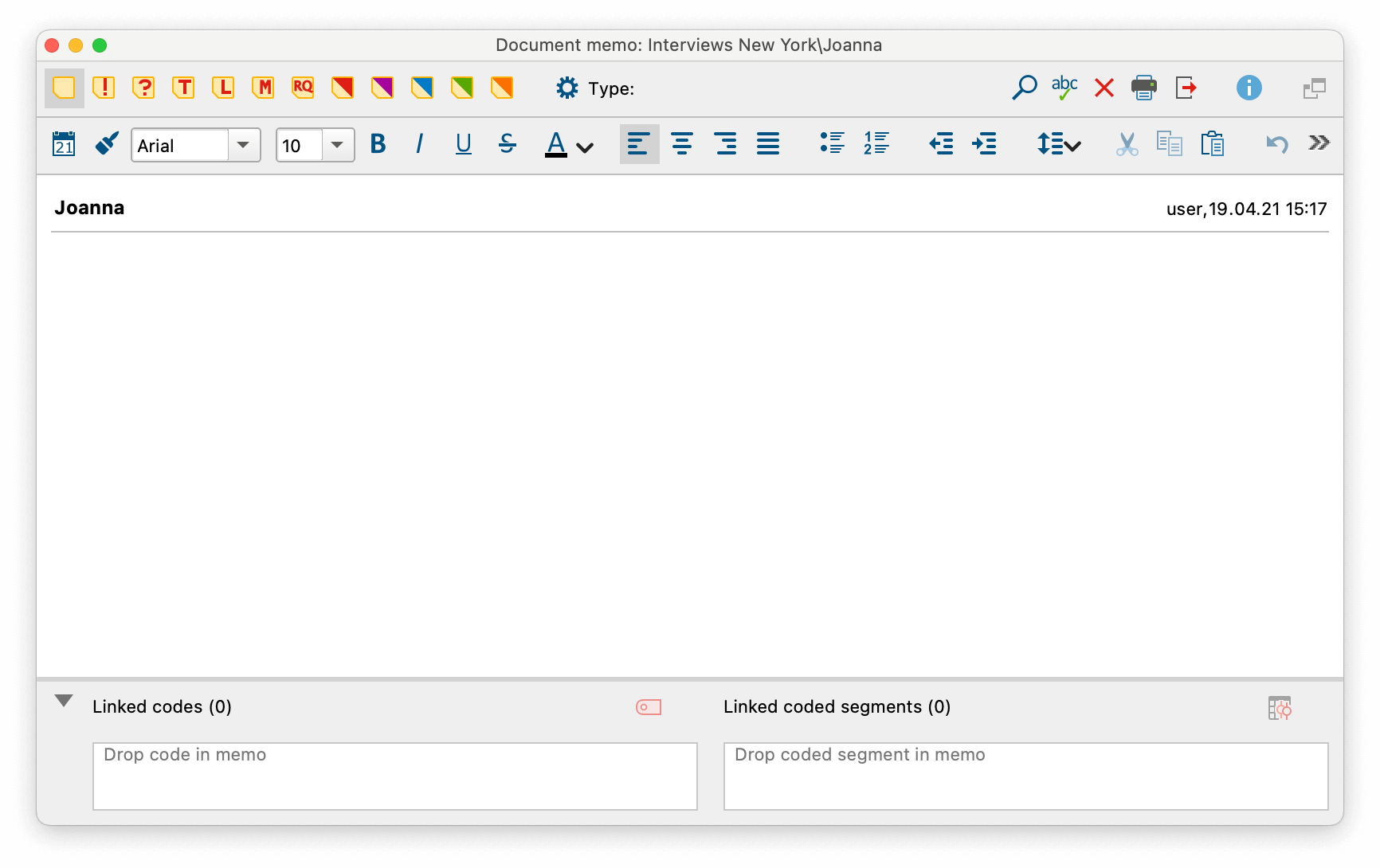 Next, you can choose to assign a ‘type’ to your memo using one of the 10 symbols provided by MAXQDA. When conducting grounded theory analysis, we highly recommend sorting your memos into types. Theoretical Memos are the most common type of memo used in GT analysis because they describe the researcher’s ideas behind their analysis activities.

The researcher ‘theorizes’ from the data by writing memos to extract theoretical meaning behind codes and logical relationships between codes during the coding processGlaser, 1998.

When you have finished writing a memo, simply close the window and MAXQDA will save it automatically. Moreover, the information you add to a new memo is saved in the open memo window at regular intervals of 5 minutes, so you don’t have to worry about losing your ideas if you accidentally close the dialogue window!

With so many different options and types of memos available in MAXQDA, you might find it helpful to have an overview of all your memo work and information. MAXQDA’s Overview of Memos was created for this purpose specifically and can help you save a lot of time when you start writing. The quickest way to access the Overview of Memos is in the Reports tab at the top of your screen in MAXQDA. 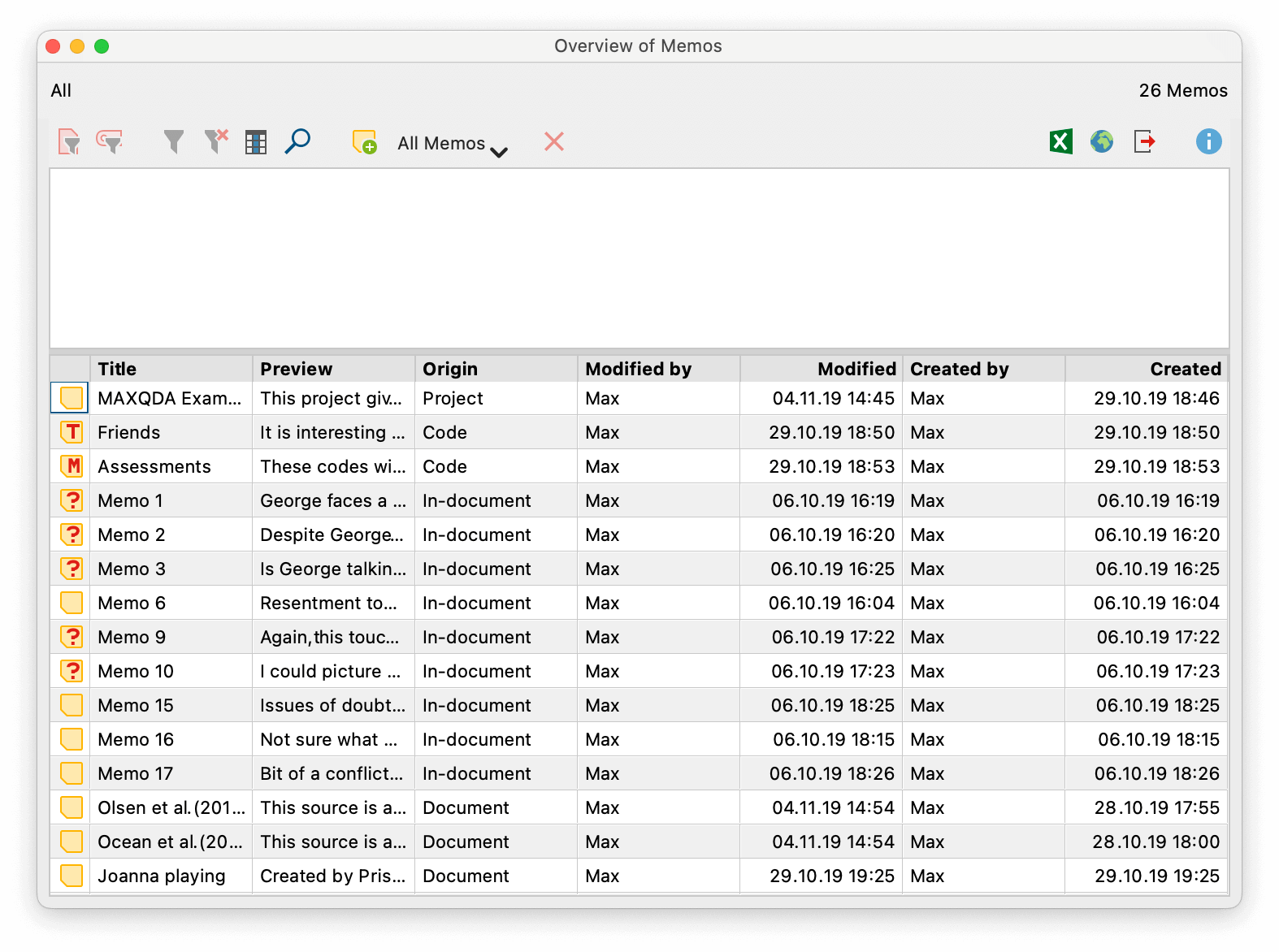 A new dialogue window will open with a table containing all of the important information about your memos, including where the memo is, the title, the author, its origin, and a preview of the memo’s content. From there, you can browse your work, filter the memos by column to find specific information, and jump to the memo you are looking for. Gathering and viewing your thoughts throughout the entire grounded theory analysis process has never been easier!

Special thanks to Dr. Timothy C. Guetterman for his editorial contribution to this article!

Editor’s note: this post has been updated from its original version published in November 2018.