One of the basic principles in law is that harm has to be repaired, either individually, collectively, or both. The notion of collective reparations has developed – and is still developing – on an ad-hoc basis in international criminal courts, regional human rights courts, and transitional justice mechanisms such as truth commissions and reparation programs. Hence, to date, neither a set definition of collective reparations nor a clear framework exists.

Such an analysis covers a high number of rulings from different institutions. In order to thoroughly analyze this large number of legal documents, I decided to do a qualitative content analysis for which I use MAXQDA, a research methodology that is rarely used in legal studies. In this blog post, I will describe my experiences using several MAXQDA functions for the analysis of collective reparations in legal documents. As my Ph.D. project is ongoing, I will focus this contribution on the study of collective reparations in the Inter-American Court of Human Rights.

Out of the 238 cases that came before the Court until July 2018, only the cases dealing with gross human rights violations and involving at least five direct victims were selected. In addition, only the judgments that were available in English were chosen. Consequently, 32 cases were selected for the qualitative content analysis phase.

As a first step, I imported the 32 judgments into MAXQDA 2018 and coded the texts (see screenshot 1). I used both deductive and inductive codes; a codebook was developed based on the literature which was tested with cases from the different institutions, and this was later complemented with codes that were derived from the judgments.

Screenshot 1: Coding judgments of the Inter-American Court of Human Rights

Additionally, all codes were placed into a hierarchial code system structure (see screenshot 2). For instance, the code for a specific reparation modality (the organization of seminars and training sessions) falls under education, which falls under the more general code of the reparation category (i.e. rehabilitation in the example). In addition, for each awarded modality, the reasons, aims, definition, and criteria are coded (when possible). 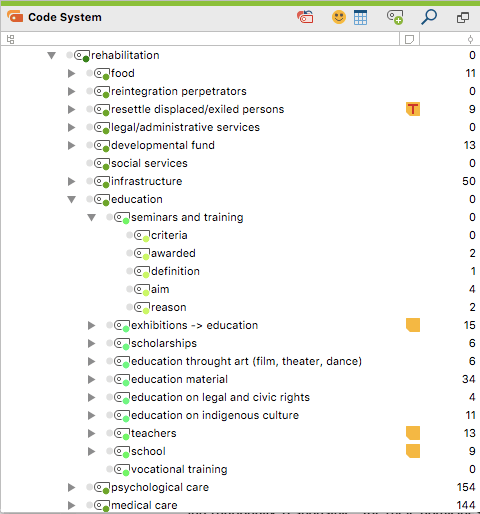 MAXQDA’s Code Frequencies function helped me to get a better understanding of the coded judgments (see screenshot 3); e.g. the State that was involved, the articles of the American Convention on Human Rights that were violated, whether state responsibility was accepted, and whether specific groups of vulnerable persons were victimized (children, women, indigenous peoples, and minorities).

Screenshot 3: frequencies of violated articles of the American Convention on Human Rights

By reading the retrieved segments of a specific code, the reasoning of the Court became clearer. Especially the codes related to the concept of reparations in general and of collective reparations specifically, such as the definitions used, the reasons given, the modalities awarded, the criteria that the reparations should meet, and the beneficiaries, were useful for this feature.

Furthermore, the judgments in the document system were arranged in chronological order, from the oldest to the newest case. Therefore, the retrieved segments were also shown in chronological order, hence showing the development of the different aspects of (collective) reparations in the Court. In order to explore these developments, I then used the crosstab function.

In addition to the development of (collective) reparations, the study of the retrieved segments and the frequency tables gave further indications for relations between codes or between codes and variables. Crosstabs were helpful in visualizing these suspected relations and developments, for instance, whether reparation modalities were awarded more often or less often over time (see screenshot 4).

The objective of my PhD research is to gain a better understanding of collective reparations in different international and regional courts, truth commissions and reparation programs. Hence, the research that is discussed in this article is only one part of a larger study.

The judgments and reports of the other institutions will be coded and analyzed in the same manner as described in this blog post. However, once the collective reparations as awarded by these different courts and commissions are examined separately, MAXQDA will be used to find and explain the differences and similarities of collective reparations between these previously analyzed institutions.

I expect that the crosstab will be helpful in this stage, especially with variables such as the Court, the field of law (human rights vs. criminal law), and the year of the ruling. Furthermore, I anticipate that some functions that were not used for the analysis of one single institution will be very useful for this overall analysis. 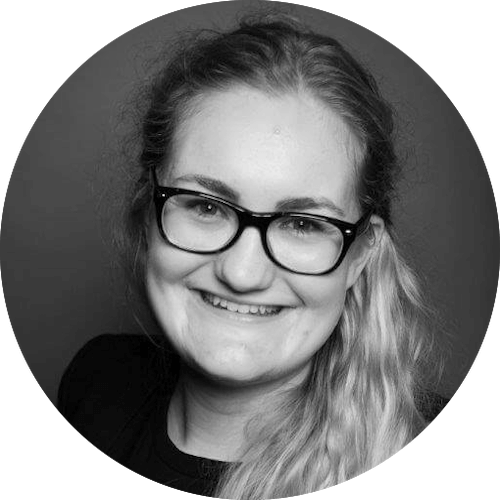 Manon Bax is PhD student at Tilburg University, the Netherlands. She finished her Research Master in Law and a Master of Victimology and Criminal Justice at Tilburg University. The field of her research interests is (collective) reparations, mass victimization, international law, and transitional justice. Her PhD research project focuses on the development of collective reparations after mass victimization in international criminal law, human rights law, and other transitional justice mechanisms.