The Lighthouse Foundation is an Australian charity providing therapeutic residential care for young people at risk of homelessness. The Lighthouse Early and Forced Marriage (EFM) therapeutic program was established in late 2018 with funding from the (Victorian) Department of Social Services. Lighthouse has employed a developmental research model to examine the Lighthouse Model of Care against the presenting needs of young women impacted by EFM. This is an opportunity for Lighthouse to tailor a suitable response based on the identified unique needs of the young women, to grow the cultural capacities of the organisation and to contribute to the thinking around housing policies for CALD communities. This research project, grounded in the individual experiences of young women impacted by EFM, seeks to provide an evidence based platform which can inform how Lighthouse’s EFM Therapeutic Program can best respond to the social and emotional difficulties arising from EFM.

The research questions were:

Early and Forced Marriage (EFM) is an issue of growing concern in Australia. It is a complex phenomenon ‘involving a range of … dynamics, inter-twined with family politics and conflict, cultural, religious and traditional practices or misunderstandings.’(Vidal, 2019) Forced marriage can be defined as a marriage

where a person gets married without fully and freely consenting because they have been threatened, coerced or deceived.  A person can be coerced through obvious means such as force, detention or duress, or through more subtle means like psychological oppression, abuse of power or taking advantage of the person’s vulnerability.(Forced marriage factsheet, Attorney general’s department)

cultural and religious ceremonies, and registered relationships, to marriages that occur in Australia, including where a person was brought to Australia to get married; and where a person is taken overseas to be married.(Manual, 2017)

EFM is widely recognised as a global human rights abuse and a practice of gender-based violence and slavery. EFM is not exclusive to ‘any particular cultural group, religion or ethnicity, and there are reports of forced marriage from all over the world.’(Violence, 2015) Early, or child, marriage refers to a union where one or both of the partners are younger than 18 years of age and therefore considered too young to give their free and full consent. Early marriage is generally considered a form of forced marriage.

The practice of forced marriage disproportionately impacts girls and young women most commonly between the ages of 16 and 21 years(Vidal, 2017). Typically, girls and young women endure pressure from members of their immediate or extended family to marry, and tactics can range from subtle to overt pressure and control. Regardless of the motivations, forced marriage compromises the young person’s individual personhood, wellbeing and future prospects.(Forced Marriage: When the family home is no longer safe)

The evaluator developed the interview questions in consultation with the project supervisor, and the Lighthouse psychologist working on the evaluation. The areas of enquiry were derived from the current gaps in the literature, namely the experience of women impacted by early and forced marriage, residing in therapeutic care settings. The interview questions also reflected the particular interests of the agency. Lighthouse wanted to get a close insight into the personal experiences of the young women in the EFM program so the interview sought to elicit detailed descriptions of the experiences within the Lighthouse program from both the young women and the staff who provided their care.

The material analysed in this study consisted of twenty-two narrative interviews with the three young women participants in the Lighthouse EFM program (including both individual and group interviews).

Thematic analysis was deemed to be the most appropriate method because the study’s primary focus was the young women’s subjective experiences of the Lighthouse EFM program. Kvale, S and Brinkman, S. (2009) recommends qualitative interviewing is the most suitable choice when seeking to ‘interrogate and understand life-worlds, experiences and emotions of people’. The need to address the personal perspectives of the participants (including their experiences and emotions) and analyse patterns of meaning in the data set aligned closely with the main purpose of thematic analysis (Braun and Clarke, 2006). An inductive approach to coding the data set was taken by the evaluator however as a result of the evaluator’s active role and theoretical assumptions, it is acknowledged that a completely inductive approach was not possible(Braun and Clarke, 2012).

Thorough familiarisation with and methodical coding of the interview data was performed according to the procedures outlined in Phases One and Two of Braun and Clarke’s (2012) process of data analysis. Chunks of data which appeared to be most related to the research question were given the most attention, with some data segments being assigned to multiple codes, whilst other data segments which were not related to the research question were not coded. Additionally, the evaluator and senior psychologist assisting in the study performed code comparison to ensure validity of the codes. During the course of coding, the potential themes began to emerge, and when all the transcripts were coded, they were organised into a set of themes and as outlined in Phase Three of Braun and Clarke’s (2012) process. To further ensure the integrity and quality of the coding process as recommended by Phase Four of Braun and Clarke (2012) the themes were subject to comparisons against the original interview data extracts. At this stage a number of the themes were consolidated increasing the overall coherence of the final set of main themes and sub-themes which were again checked for internal and external homogeneity and to ensure they related to the research question. The most compelling interview segments of data were then chosen to represent the essence of each theme which structured the final report (Phases Five and Six, Braun and Clarke, 2012). To assist in the organisation of the data, all of the transcripts were handled, stored and coded using MAXQDA 2020 which is a qualitative data management and coding program. Some of the coding was also conducted manually.   The table below outlines the themes and sub-themes which emerged from the coding process.

The themes emerging from the narrative interviews included the position the young women in the EFM program occupied, particularly in the early stages of their participation in the EFM program – the experience of grief, loss and mourning, including what appeared to be a painful longing for their families, particularly their mothers and a sense of dislocation and disorientation. The second theme identified was the experience of physical and emotional containment, with the physical space of the Lighthouse home providing a containing function for the young women, including the experience of being held in mind by caregivers and navigating the boundaries associated with the program. The forming of trusting relationships emerged as a cornerstone theme, including the strong sense of community existent amongst the participants, and afforded the young women opportunities to build interpersonal effectiveness and have experiences of relational rupture and repair. The final theme was the orientation towards a future which felt hopeful and bright for the young women, including the value of work and learning, the (sometimes) painful navigation of an inevitable transition out of the program and the growing sense of agency which allowed the young women participants to make a life for themselves which was of their own choosing. The themes followed the rough trajectory of the young women as identified over the course of the evaluation period captured through the various activities undertaken by the evaluator to assess the impact of the program over time.

This word cloud is a visual presentation of the most commonly used words in transcripts of the twenty-two narrative interviews conducted as part of the evaluative study. 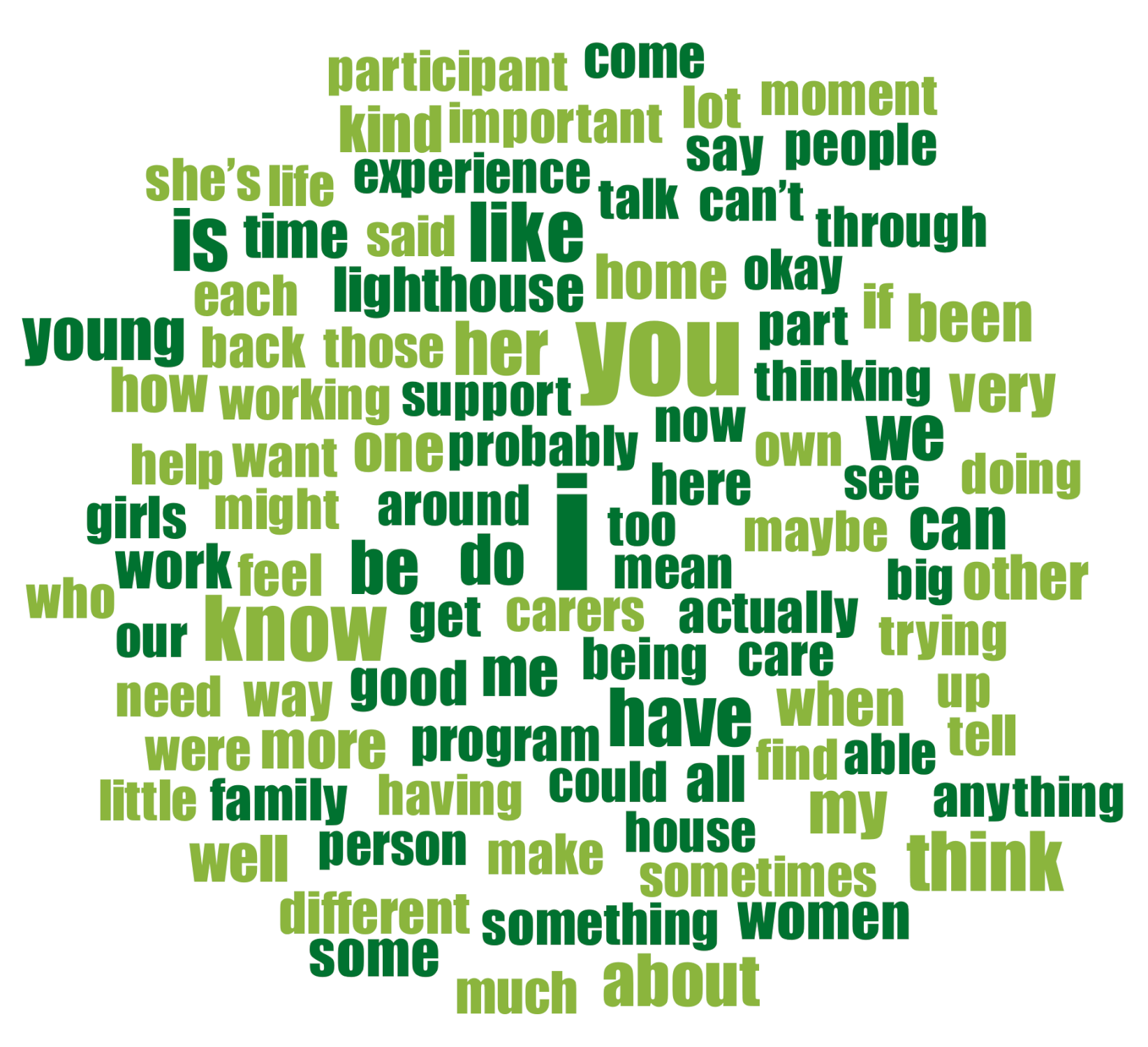 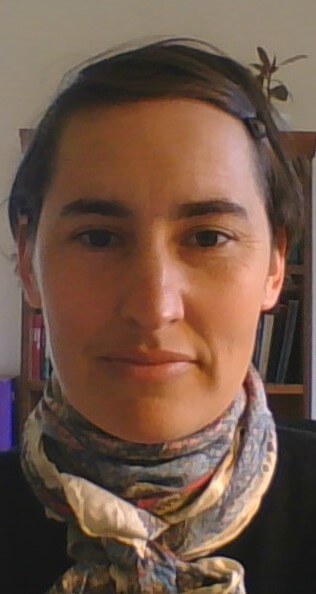 Charlotte Powell is a clinical researcher working at the Lighthouse Foundation, based in Australia. She has a background in secondary teaching and student wellbeing and has been instrumental in developing and delivering a number of mental health programs and providing direct pastoral care to staff and students in education settings across Victoria (Australia).

Forced Marriage: when the family home is no longer safe, Landvogt