Free mixed methods data sets are still rare. To at least partially address this problem, we have now made the Titanic data set publicly available at https://sepia2.unil.ch/wp/mixedmethodstitanic/.

We have used the Titanic dataset to teach mixed methods for years and it always works extremely well. Students are interested both by the historical case of the Titanic and by the spectacular correlations between gender/class and likelihood of survival. The great thing about this example is that the Titanic data allow you to show that a mixed methods analysis is actually superior to a mono-method analysis of the survival probabilities on the Titanic. The analysis permits not only modeling the relationship between independent and dependent variables, but also reconstructing the mechanisms that led to the different survival probabilities. 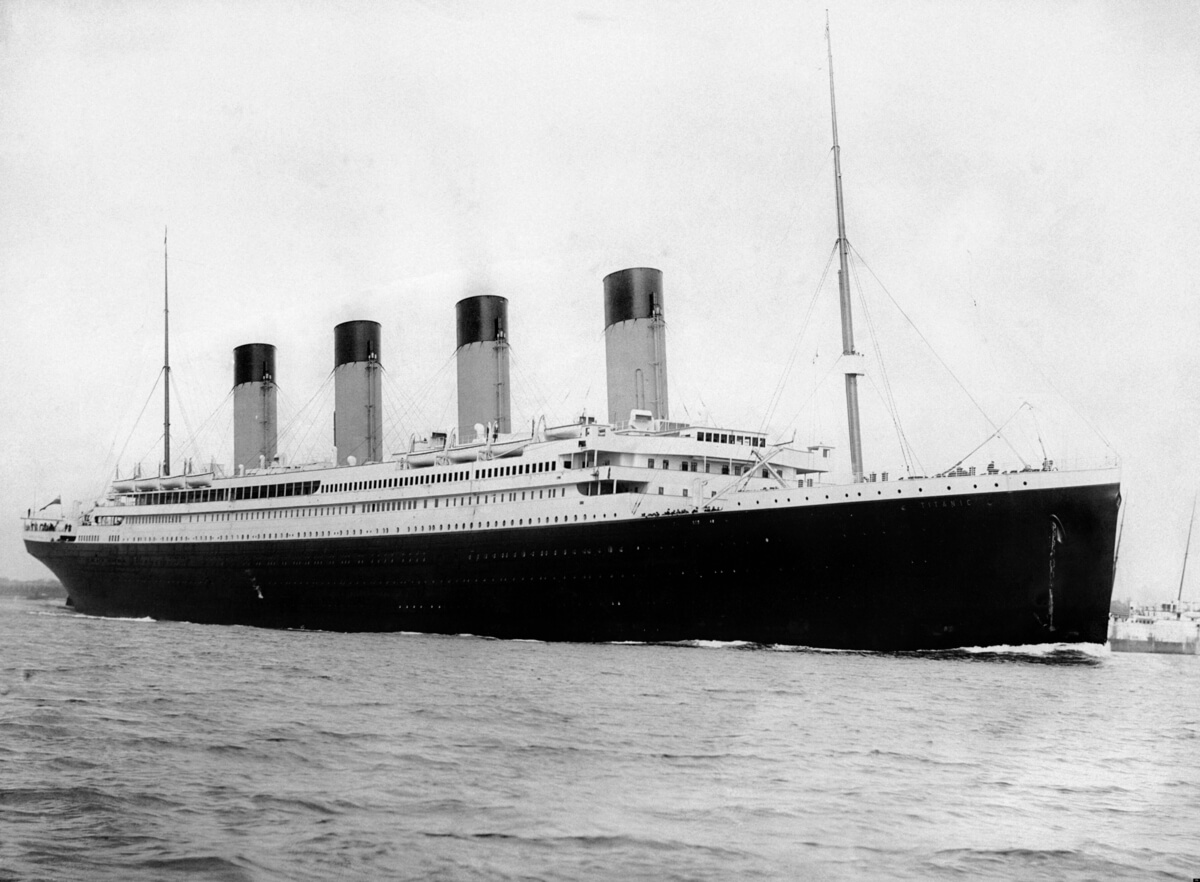 The website includes the downloadable datasets of survivor testimonies (n = 214) in MAXQDA format and a version of the famous quantitative data set of the perished and survived individuals (n = 2207) on the Titanic. The qualitative and quantitative datasets are linked and ready for mixed methods analysis. A step-by-step exercise and a pedagogical paper as well as two other publications using the mixed methods dataset are downloadable as well (Stolz and Lindemann 2019; Stolz, Lindemann and Antonietti 2018).

In our teaching, we always start with the research question: What explains higher or lower survival probability on the Titanic? We do some initial theorizing with the students, and ask them to suggest explanatory variables that may have led to a higher or lower probability of surviving on the Titanic. Students come up with variables like class, gender, physical strength, social ties, location of the cabins etc. For every independent variable mentioned, we ask students to specify the “causal story” or “causal mechanism” of how exactly this explanatory variable might have influenced the response variable. We encourage students to be as precise as possible for every assumed mechanism.

In a second step, we let them do some exploratory quantitative analysis (in SPSS or R). Here, they find some of the astounding survival differences between men and women, between passengers of different class, and between crew of different types (Figure 1). We ask: why do we find these massive differences in survival? Are they in line with our initial hypotheses? In the discussion with students we find that some of their initial hypotheses seem to have been confirmed, but that much remains in the dark. For example, why did men survive at all, if the rule “Women and children first” was applied? 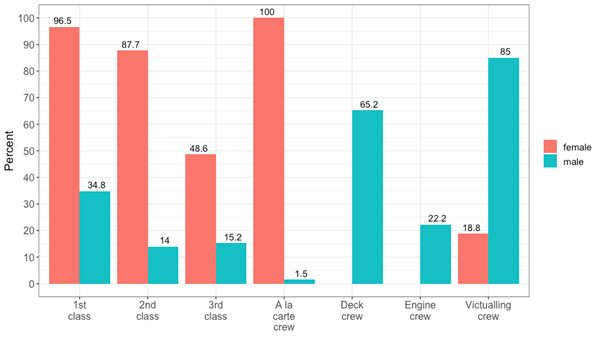 The third step consists in open coding on a few testimonies in MAXQDA. This is perhaps the most enjoyable part of the exercise, as students go through different testimonies and are often amazed at how the hypotheses they had made on the basis of their everyday knowledge were not sufficient to capture the complex reality on the Titanic. We often get students exclaiming things like: “Oh my god, I forgot about the crew”. We go very slowly through the examples (the ones presented here, and others), and ask students to rephrase what is happening in their words, name new hypotheses, and suggest possible codes. For example, the first extract in textbox 1 clearly shows that a rule -“women and children first”- was applied – but that the rule could only be applied if there were women to put in the boats!

(1) My mother got in with her maid. The officer called for other women, but there were none thereabout. Then he called for men passengers. There were only about six just there, of whom I was one, and we got in. The boat was still not filled, so the officer put in some of the crew.
Cardeza Thomas

(2) When the first boat was lowered from the left-hand side I refused to get in, and they did not urge me particularly; in the second boat they kept calling for one more lady to fill it, and my husband insisted that I get in it, my friend having gotten in. I refused unless he would go with me.
Smith Mary Eloise

(3) The men that were in the boat at first fought, and would not get out, but the officers drew their revolvers, and fired shots over our heads, and then the men got out. When the boat was ready, we were lowered down into the water and rowed away out from the steamer. We were only about 15 minutes out when she sank.
Daniel Buckley

(4) The order maintained on the Titanic was what I would call remarkable. There was very little pushing, and it was in most cases the women who caused the commotion by insisting that their husbands accompany them in the lifeboats. The men were very orderly.
Max Frohlicher

Fourth, we show our final coding scheme to students and explain its main codes (filling rules, authority acceptance, way to boatdeck) as well as the most important subcodes. We tell them to imagine that they have themselves coded the whole material in this way and that they must now continue to analyse the data with the help of these codes. It is here that we teach them various ways in which MAXQDA mixed methods tools can be extremely useful for analysis. 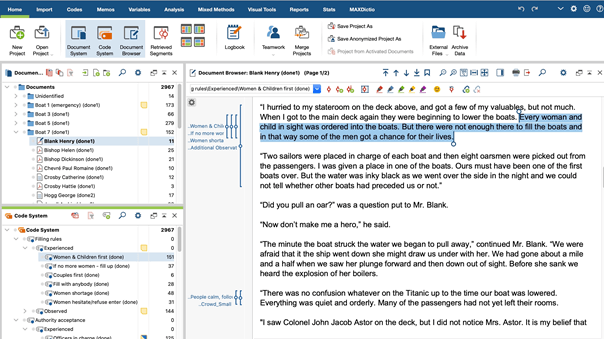 Figure 2: The Titanic dataset in MAXQDA

Once students have a better understanding of the social game played on the Titanic, and new ideas about what might be important in explaining survival probabilities, we invite them, in a fifth step, to do a second round of quantitative analysis. This round incorporates analyses that look at the specific time that individuals boarded a lifeboat and the side of the Titanic from where they boarded the lifeboat. Students can now, for example, show quantitatively what they had suspected on the basis of their qualitative analysis: the rule “Women and children first” was interpreted very differently on the port and starboard sides of the Titanic. This gave men on the starboard side a much higher probability of survival (Figure 3). This is just one of the various insights that students arrive at.

We end the exercise by summing up the overall causal narrative that has emerged by combining quantitative and qualitative analysis. We point to the fact that we have learnt more with mixed methods than we could have learnt with only one method and that our conclusions are therefore more valid. We also do some reflexive questioning regarding the reasons why mixed methods works so well in this case, the limits of our analysis, and the question of whether Celine Dion’s “My Heart Will Go On” is to be regarded as cheesy or not. 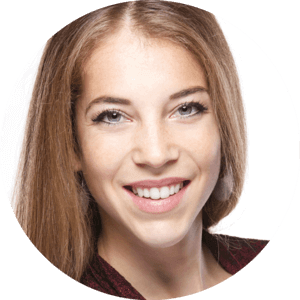 Anaïd Lindemann is a PhD candidate in sociology at the University of Lausanne. Specialized in sociology of religions, she is writing her thesis on the different forms of discrimination and prejudice against Muslims in Switzerland. She co-wrote and published articles on other topics such as religious diversity, religion/spirituality in prisons and media discourses on immigration. She mainly resorts to quantitative and mixed methods in her research. 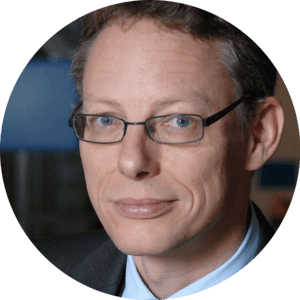 Jörg Stolz is Professor of the Sociology of Religion at the University of Lausanne. Combining an explanatory approach with mixed methods, he works on the description and explanation of different forms of religiosity, evangelicalism, secularization, and islamophobia. He is the author of many articles in leading sociology and sociology of religion journals, among them « Explaining religiosity. Towards a unified theoretical framework » in the British Journal of Sociology.

Stolz, Jörg, Anaïd Lindemann, and Jean-Philippe Antonietti. 2018. “Sociological Explanation and mixed methods: the example of the Titanic.” Quality and Quantity 53(3):1623-43.