In the previous article, I demonstrated how MAXQDA was instrumental in conducting a literature review of energy efficiency in the Portuguese water sector. In this one, I will show you how I managed to conduct interviews and organize them in my research with the help of MAXQDA’s features, namely in such tasks as transcription, coding, and analysis. So, I will tell you about some of MAXQDA’s features that impressed me and helped to overcome some of the difficulties encountered during this part of my research.

Interviews play a major role in this type of research, and, in this case, they have two main objectives:

Although each modality of interview has its advantages and disadvantages, the face-to-face method was preferred because it allows a higher level of interaction between the interviewee and the interviewer, as well as the collection of various information (ex: body language) that could go unnoticed or that would be more difficult to obtain otherwise, such as by telephone. Nevertheless, given the current circumstances faced by society due to the context of the pandemic, the interviews were eventually conducted under unique and different conditions that partly hindered the process.

Conducting the interviews provided a rich and unparalleled experience in understanding the different realities of each utility and how it influences their operation and objectives, but also to learn by interacting with people with different backgrounds and vast professional and life experiences. 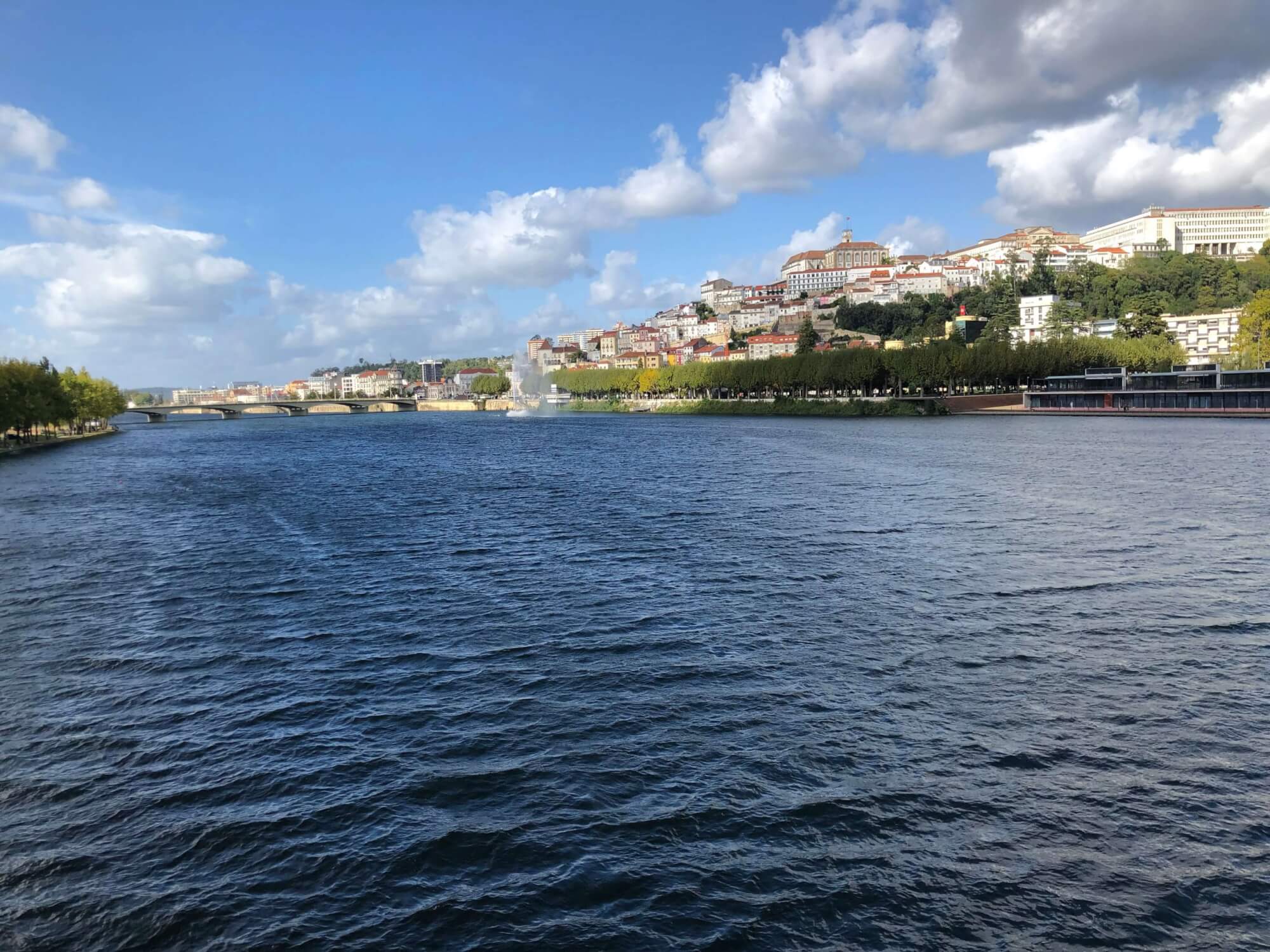 The first interview was with the Director of Engineering and Asset Management of Águas do Alto Minho, a relatively new water and wastewater utility, which resulted from the aggregation of seven municipalities. Drawing upon a young team but with a vast experience in the sector, this new utility intends to face several challenges, such as reducing water losses by more than half, with a very innovative and sustainable mentality. 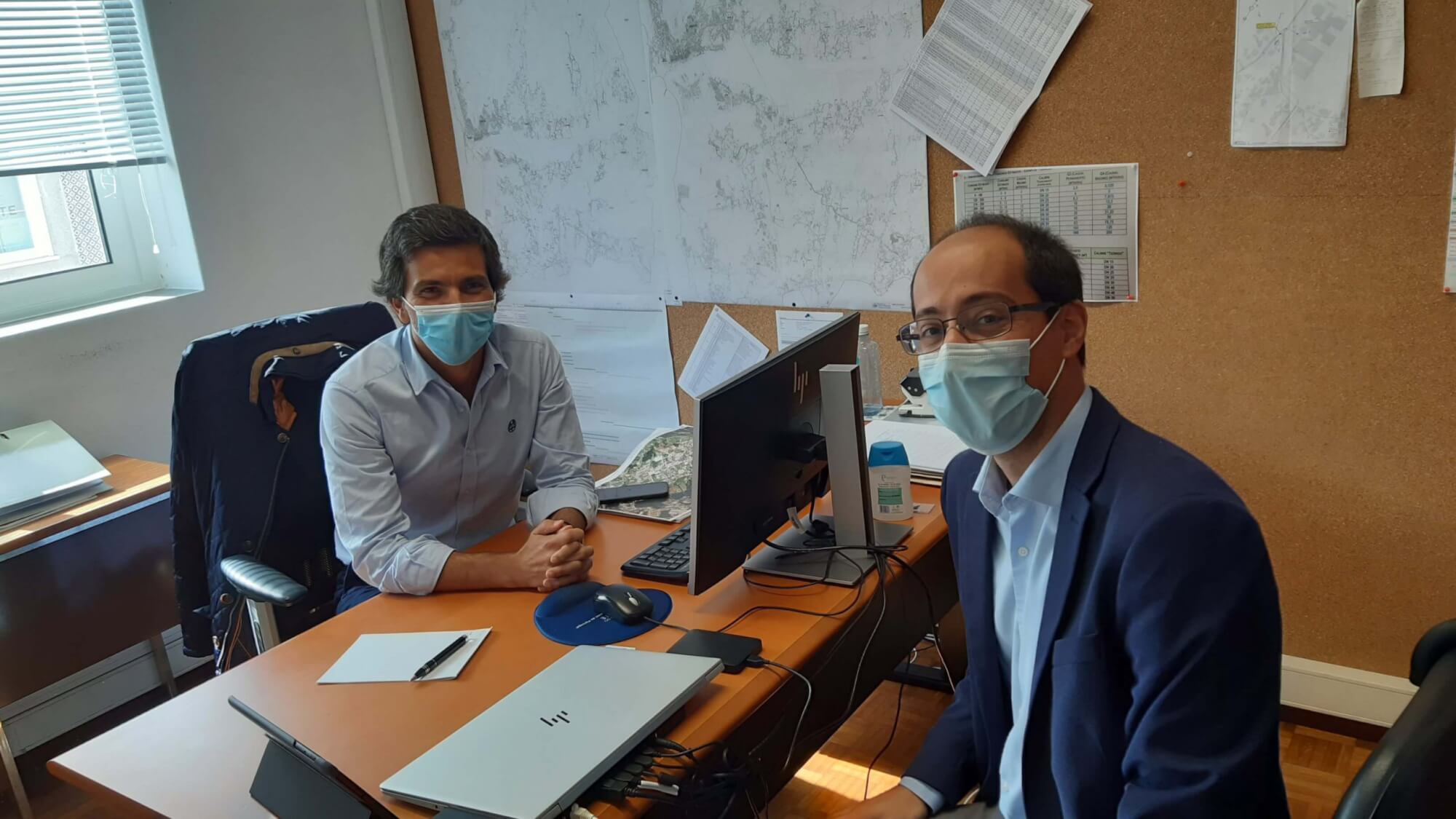 Figure 2: Interview with Pedro Cruz, the Director of Engineering and Asset Management of Águas do Alto Minho.

Usually, and this time was no exception, interviews are recorded with due permission to facilitate future transcription and analysis, as it is often unfeasible to write to the rhythm of the dialogue. Both smartphone and tablet proved to be a great help in this task, avoiding resorting to other equipment and allowing easy export to computer for future handling and analysis. In addition, MAXQDA has the advantage of allowing the import of various audio and video formats, such as those from the smartphone and tablet, for later transcription. 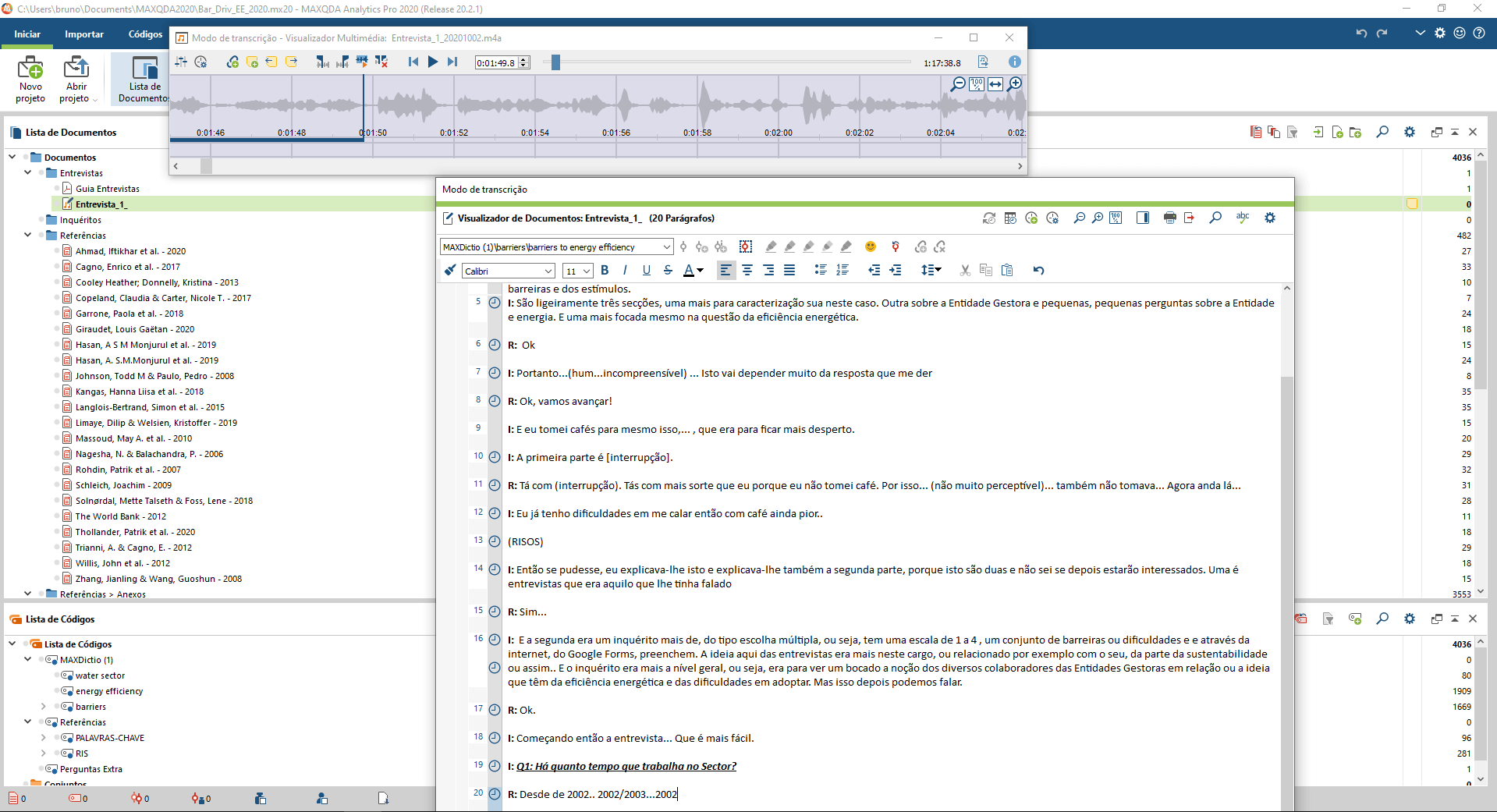 The transcription process is a much more complicated and time-consuming task than it usually seems. (And believe me, it takes much longer than dialogue and what we initially think!) And that is why I consider the ability to assist in the transcription process to be one of MAXQDA’s great capabilities in this type of research because it has significant added value that helps to simplify the whole process.

One advantage is the possibility to adjust the playing speed to help follow the different dialogue rhythms that normally occur during interviews, as well as to adjust it to the user’s transcription ability (which is often affected by the fatigue of the process). 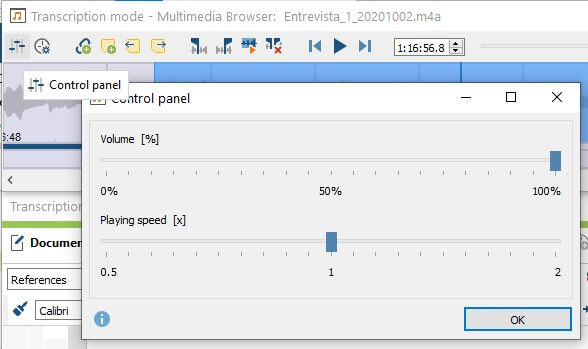 Another advantage is the ability to adjust the rewind interval for each time playback is stopped (Figure 5 – a). This option allows you to continue the process when reproduction is resumed without any part being skipped and forgotten. (And believe me, there is always some small part that tends to escape!)

There is an additional option in the transcription settings that helps you to speed up and simplify the process even further, namely the automatic speaker change (Figure 5 – b). In my case, since the recording had only two speakers (the interviewee and the interviewer), this option was very important to speed up the transcription, as it was possible to set the designation for each of the speakers (I kept the original one “I:” and “R:”) and automatically switch the speaker designation every time a new paragraph was started, thus avoiding having to write the speaker designation each time. 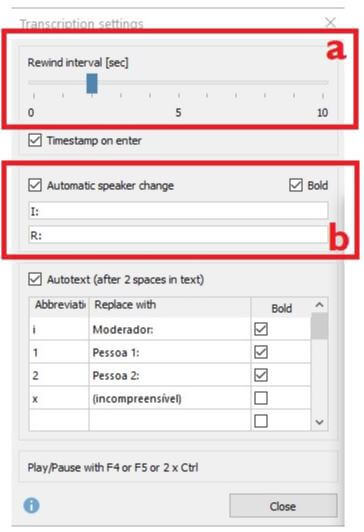 Finally, another advantage is the possibility of simply and intuitively assigning timestamps to parts of the text, making it possible not only to identify what that part refers to, but also to listen to specific excerpts and assign codes to them. In short, these features helped make the process significantly less time-consuming and complex.

Using MAXQDA also allows you to code data or, for example, add memos while you are transcribing. (You will see that this possibility is very important when you come up with those disruptive ideas or conclusions while transcribing the audio of an interview.)

In my case, to each distinct category of codes (created according to my research goals) I assigned a different color so that I could later use another of MAXQDA’s features, the Document Portrait. By using this feature, it was possible to observe the distribution of the various subjects throughout each interview, as well as the dimension, frequency, and importance in dialogue of each of them.

Transcription Mode in the MAXQDA Manual

First conclusions and next steps

After assisting with the literature review that helped develop the interview script, MAXQDA significantly facilitated such a time-consuming process as transcription, speeding it up and saving time through its special features, such as the ability to adjust playing speed or rewind interval. In addition, and without using any other software, MAXQDA also enabled other tasks to be performed, often simultaneously, with transcription, such as the coding and analysis through very intuitive functions that allowed a qualitative analysis of the interviews and to draw some important conclusions.

So far, the testimony of some employees of water and wastewater utilities has helped not only to grasp the importance that this sector plays in society, but also to validate some of the challenges that this sector in Portugal will face in the next decade, such as reducing water losses and increasing the resilience of systems.

Given these and other challenges listed during the interviews, the importance of continuing the transition towards greater efficiency and sustainability in the sector becomes evident, which must be addressed through innovative, disruptive, and sustainable measures, solutions, and strategies to overcome existing barriers, such as the reuse of treated wastewater or sludge valorization, to ensure the future of society and the environment.

Finally, the next steps will be to continue the interviews and to conduct online questionnaires to understand in more detail the barriers and incentives to energy efficiency in such a crucial sector and to achieve a sustainable development of society. 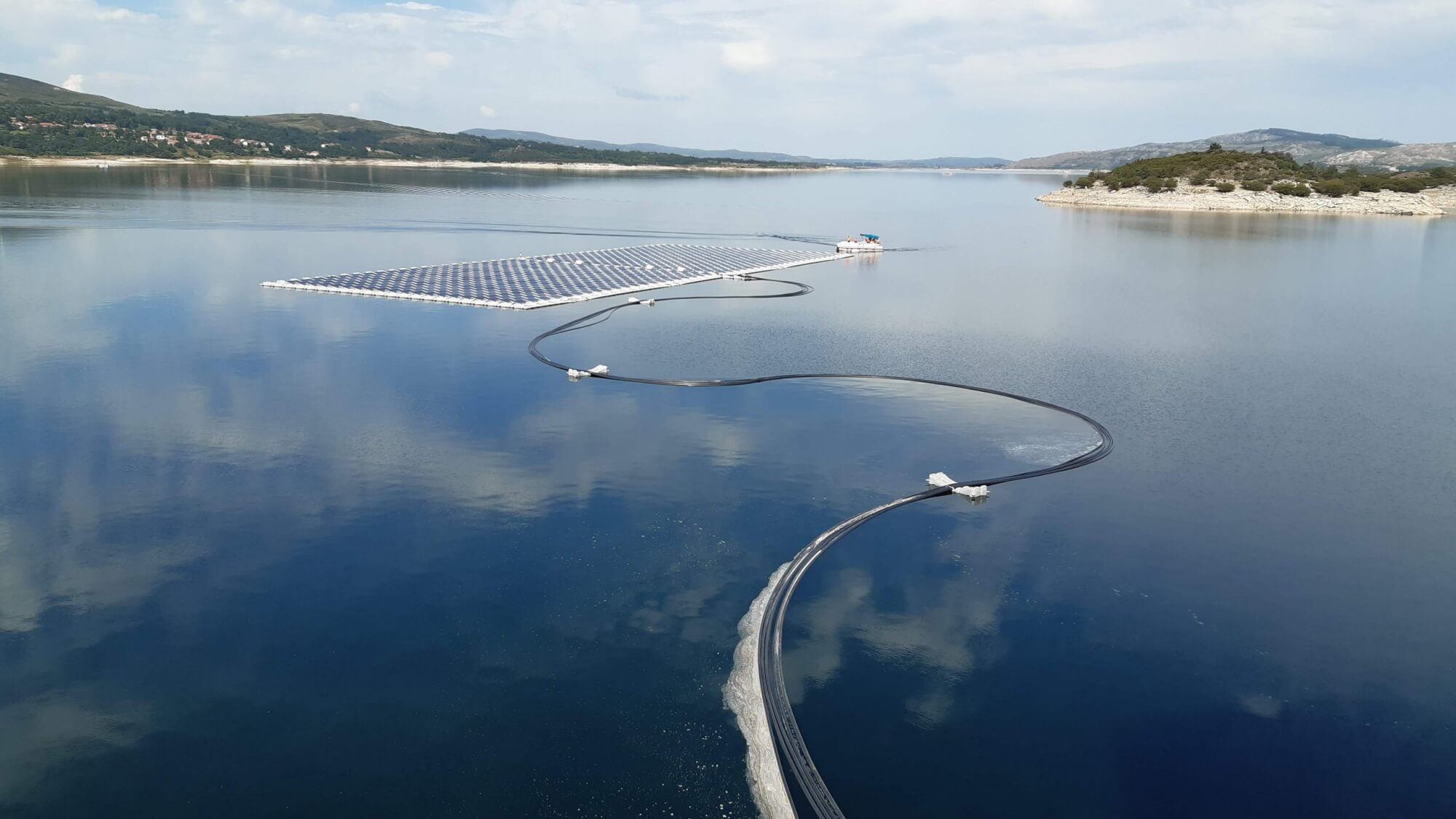 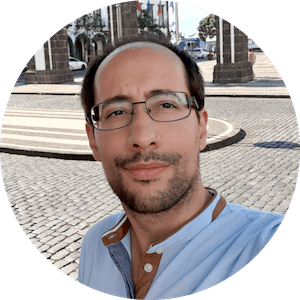 Bruno Miguel de Jesus Cardoso is a recipient of MAXQDA’s #ResearchForChange Grant, and a Ph.D. student in Sustainable Energy Systems at the University of Coimbra, Portugal. His research project titled “Energy consumption in the Portuguese water sector: benchmarking, barriers and driving forces to energy efficiency” is in progress in Lisbon, Porto, and Coimbra, Portugal.