My central research topic over the past six years (my doctoral thesis) has been the concept of the hybrid identity of migrants living in Germany and Belarus. My research has focused on communicative strategies of migrants as directed at the host state and society:

My research material includes semi-structured interviews with migrants from Turkey, Syria, Iraq, and Afghanistan living in Germany and Belarus, as well as scripts of TV programs and talk shows with the participation of migrants. During the interviews, the migrants were prompted to talk about their routines and problems related to their migration.

My research involved working with a large body of texts. Quick transitions from one location in the text to another is a necessary condition for a systematic analysis of the material. Given these demands, MAXQDA can serve as a systematic tool for quickly sorting out and analyzing research data.

In Picture 1 (below), you can see how I coded key points text by text in MAXQDA’s “Document Brower” window, which then allowed me to sort out connected ideas in my Code System. In further processes, I could always rename the existing codes or reorganize my code system flexibly with just a few simple clicks.

Picture 1: Working with a large text body – Coding with MAXQDA

Visualizing the discourse structure with MAXMaps

After coding the entire body of texts covering one focus group discussion, I used MAXQDA’s MAXMaps feature to visualize the topical structure of the discourse. The visualization of the discourse structure is important when we compare several discourses on the subject of their thematic representation.

Picture 2: Visualization of the discourse structure with MAXMaps

In addition to the qualitative significance of represented topics, I was also interested in the quantitative correlation of topics in the discourse. This led me to MAXQDA’s Document Portrait function. You can use this function only if the code groups are marked with different colors in accordance with the discourse topics. By assigning colors to different themes of discourse, I could see how topics were distributed in the discourse and what proportion of the discourse (quantitatively) was allocated to each topic.

Analysis of lexical significance with MAXDictio

As I mentioned before, an important element of my research was dedicated to lexical analysis, which was carried out at the in-depth analysis stage of migrant discourses. The analysis of the quantitative and qualitative significance of lexemes and language categories allowed me to better understand individuals’ processes of verbalizing non-linguistic realities. That is, the processes migrants used to name, interpret and evaluate their new living conditions. In this regard, MAXQDA offers the following useful functions:

2. The “keyword in context” function (MAXDictio) enabled me to combine all the contexts of a word on one page, which is important for subsequent discourse analyses. In the next picture you can see all combinations of the keyword ‘identity’, which helped me to better describe this concept taking into account all topics in which the given word was implemented.

3. Unlike the previous function, the Interactive Word Tree (MAXDictio) does not select all contexts of the word but visualizes the most important semantic-syntactic relations of the word in the text. Here, all I had to do was choose a keyword and enter it into the search bar.

The description of the results generated by MAXQDA through these lexical functions helped me to identify and describe migrant discourses as an integral discursive phenomenon realized through language.

My research results so far show that migrant identity is a discursive construct, which is formed by a set of meanings and values present in national discourses (donor culture) and the public discourse of the host society (recipient culture). Reconstruction of hybrid identity became possible through my analysis of migrant discourses (interviews, talk shows with migrants).

Using MAXQDA was helpful because it allowed to process, structure and describe a large body of texts, to reconstruct key topics, determine the qualitative and quantitative significance of keywords, to describe the linguistic patterns represented in the discourse of migrants. 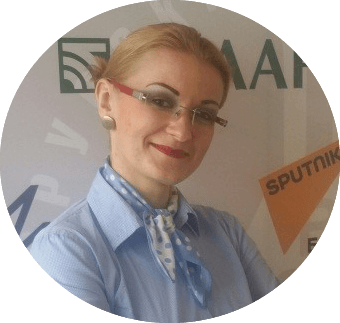 Katsiaryna Yadchanka is PhD student at the Belarussian State University Minsk. She graduated in Germanic Studies and Intercultural Communication at the Belarusian State University Minsk. The field of her research interests is linguistic discourse analysis, migration studies, hybrid identity. Her research project is titled “Linguistic realization of hybrid identity in the discourse of migrants”.