This article is a brief summary of the full research paper published at https://marieolivie.com/afghan-diaspora-in-the-digital-age/.

The Digital Age has offered various possibilities for how we can enhance our daily lives with digital technologies. Even though it seems a given for many of us, there are still people who do not enjoy this benefit. One of the “offline” countries, where these people come from, is Afghanistan. Many circumstances suppress the evolution of digitalisation. The first is “the endless war.” One of my Afghan students mentioned that whenever the telecommunication company built a satellite or any other component to deliver signal or internet connection in the city, the Taliban bombed it immediately because people could get easier access to education and information. The second is female illiteracy. The majority of my Afghan students to whom I taught English were illiterate women who could not read and write. Therefore, even if the telecommunication company were able to successfully build infrastructure, the digital gender gap would be immense, and the majority of men would not allow women to possess any digital device. The third is religion. The Internet provides us with the freedom of expression worldwide. However, there still persist obstacles to the Internet in the Afghan constitution, particularly article 3: “no law shall contravene the tenets and provisions of the holy religion of Islam in Afghanistan” (Afghan Embassy, 2004). Therefore, social media platforms are censored in most cases.

When you take into account these three elements, the question is: If women have limited access to the Internet because they are uneducated, which is caused by patriarchal values in conjunction with religious influence, how does this issue shape Afghan women’s behaviour after they have settled in the host country, particularly in the United Kingdom, where cultural isolation almost disappears, and the Internet is taken for granted as an ordinary instrument of daily life? As a researcher coming from the European Union and having never travelled to Afghanistan, I had to develop a lively picture of how the gender gap looks in practice after their arrival to the destination country, the United Kingdom. Therefore, I conducted fifteen interviews with refugees, of whom ten were female. This sample was extended by two virtual interviews, one with an NGO based in Afghanistan and one with a former NATO representative. Interviews were analysed to answer the research question: “How does the Internet shape Afghan refugees’ behaviour?” Although all participants stated that they did not possess a digital device before and during their migration journey, access to the Internet played a crucial role after arrival in their destination country, such as the improvement of livelihood, re-education about religion and decline in the cultural bond. 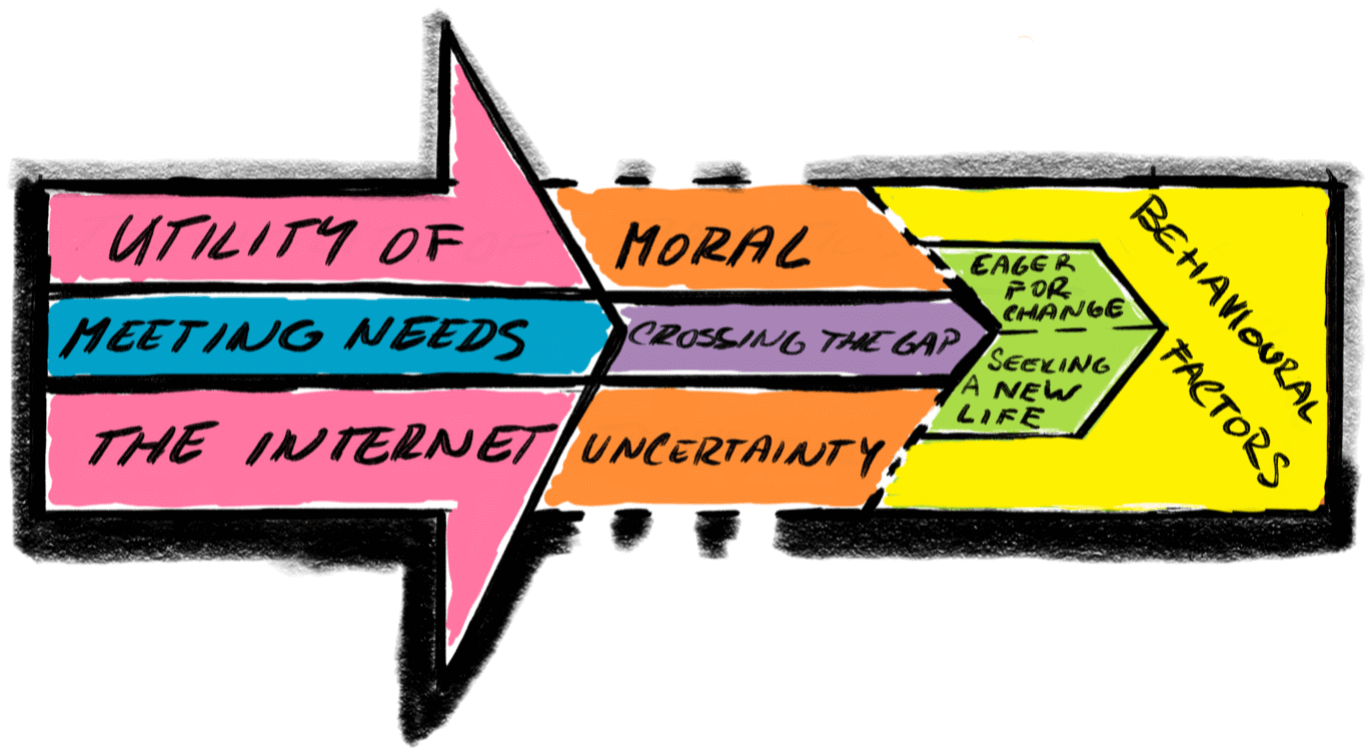 Participants were recruited by snowballing strategy (Figure 2) during English classes or working hours in a Queen’s awarded NGO in London. There were two phases of recruitment to achieve theoretical saturation that came from my experience being presented inside the organisation and because I was in direct contact with refugees every day. Therefore, the snowballing strategy could be applied inside the organisation and beyond, especially based on recommendations. Participants were carefully selected according to strict criteria. The first phase of participants had to be born in Afghanistan, be over 16 years old and identify as a refugee. Participants in the second phase had to be organisational representatives either based in the European Union or Afghanistan, and be aware of the situation in Afghanistan, or be directly involved with the Afghan diaspora living in London. 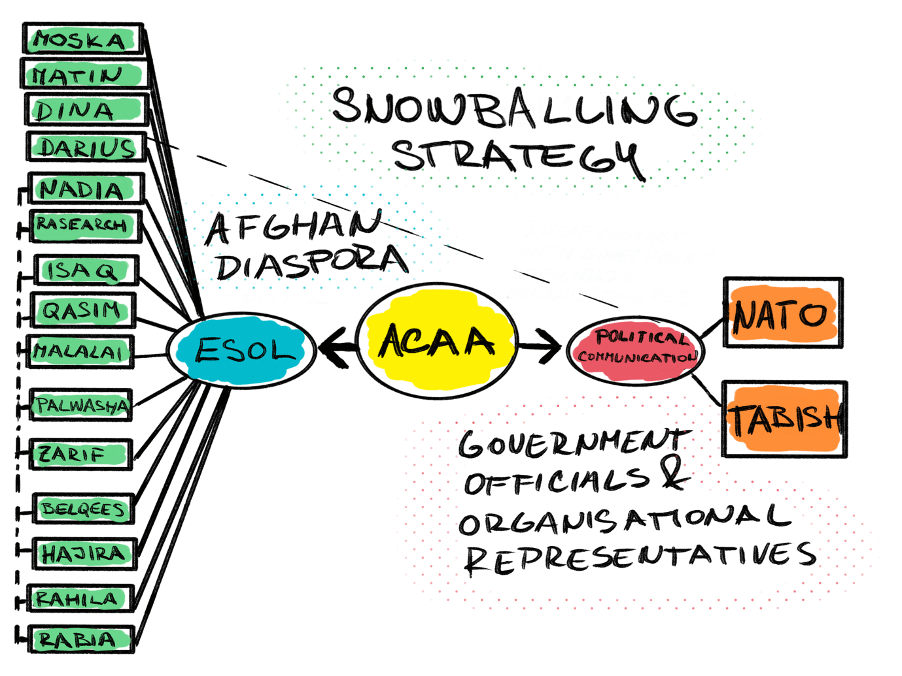 To successfully analyse an extensive file of collected data, MAXQDA was employed for transcription of seventeen interviews in the English language. In some cases, translation was required due to the language barrier. You can find detailed guidelines on how to easily transcribe files with MAXQDA here:

The coding feature is a crucial part of constructivist grounded theory because it elaborates substantive theory grounded in data, such as meanings and perceptions (Charmaz, 2006, p. 8). Each interview was transcribed and coded in MAXQDA immediately after having recorded the interview with participants to minimise preconception and preserve originality. When this transcription and coding were done, the interview guide, which had the form of loosely guided exploration, was modified to comply with principles of theoretical sampling (Glaser and Strauss, 1967, pp. 45-49).

For coding features, such as the smart coding tool, segments data, open coding marks, in vivo coding, and shortcuts (which can make your life much easier), follow this link. MAXQDA generated the platform of initial coding on which literature review was built with the support of memo-writing and the constant comparative method.

This research played a significant role in contributing to transnational studies in terms of elaborating the utilisation of the internet by a specific minority ethnic society. Although Afghan refugees did not have access to the internet prior to their illegal journeys to Great Britain, the internet was seen in all cases as an integration tool to British society. For example, some of them lived in a territory ruled by a radical religious-political movement called the Taliban. In these territories, women were usually illiterate and dependent on their husbands. After their arrival, they utilised the internet and got access to worldwide web information. Therefore, they become consumers of information readily available on the internet, such as religion. There were significant transformations during research. For example, these Afghan women were in the procedure to divorce because they received this right for the first time in their life and/or they could choose their own clothes every morning, and not to be forced to wear a scarf or hijab etc. The internet also helped them keep in touch with their relatives living in Afghanistan, and in most cases, they contacted them after reported attacks in Kabul and around areas where their relatives were living. This research was also enhanced by insights from the former head of the NATO mission and NGOs based in Afghanistan.

Glaser, B. and Strauss, A. (1967) The Discovery of Grounded Theory, London: Aldine Transaction. 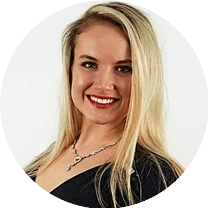 Marie Zamecnikova is a recent graduate with distinction from the Royal Holloway, University of London, a holder of the Executive Diploma from the European Academy of Diplomacy, and a candidate for a degree in Digital Humanities at the KU Leuven (https://www.kuleuven.be/kuleuven/). During MA studies, Marie was entitled to the Political Communication in Afghanistan and Central Asian Association (https://acaa.org.uk), where she was in direct contact with Afghan refugees and organised events in the House of Commons in London. She also did a traineeship at the European Economy and Social Committee (www.eesc.europa.eu) and at the Embassy of the Czech Republic in London. During BA studies, Marie was the first student conducting program Erasmus+ in Bosnia and Herzegovina at the International BURCH University in Sarajevo (https://www.ibu.edu.ba). She also holds a Community Manager position at the Atlantic Forum (https://atlantic-forum.com), where she is responsible for communication agenda. Marie regularly blogs on her website (www.marieolivie.com) and is active on social media related to the digital age, virtual work organisation, politics of digitalisation and digital psychology.