My research focuses on the identification and integration of Hungarian Jews living in Israel. In the frame of my PhD, I conducted 90 interviews including several subgroups (such as those who immigrated in the 1990s, 2000s, those who returned and the second generation). Many Hungarians come back or go further after a couple of years in Israel, my research aims at understanding the key(s) for successful integration by asking those who managed to succeed as well as those who came back or went to another country.

Preparing for autocoding during transcription

As my sample is rather huge (due to the subgroups) and because coding is an iterative process, it takes a lot of time. One way to make it faster was using autocoding. For my analysis, I used both inductive and deductive coding. The latter more or less coincides with my guiding questions throughout the interview, and the former is created in the course of the analysis. One of the main codes is “globalization”. It is a well-known fact that globalization makes migration easier in multiple ways, changes the characters of immigrants as well as the forms of mobility. Hence migration is no longer an unidirectional movement. I realized only later how much it affects the life of my interviewees in different ways. When words or expressions associated to globalization were mentioned, such as Skype, Wizzair, Wi-Fi, cheap flight, WhatsApp, smartphone, YouTube and internet, I manually coded them with “globalization”.

Besides such individual expressions it was also an indicator for globalization if interviewees used English language to describe what they mean. As my interviews were mostly conducted in Hungarian but transcribed in English (mainly because my dissertation will be in English), I inserted in the transcript the comment “in Eng” in brackets when they said a phrase or a whole sentence in English. Later I wanted to code these kind of passages, a process I could speed up significantly by using autocoding.

How to use autocoding? It is very simple. First I had to click with the mouse on the code I wanted to use (or create one). Then I did a lexical search for the given word/expression and then I chose the autocoding function. Depending on what I wanted to code, I could choose from coding only a string, a sentence or the whole paragraph. In the case of my example, I decided to code only the word “in Eng” as it differed in every case whether one word or the whole sentence was in English language. 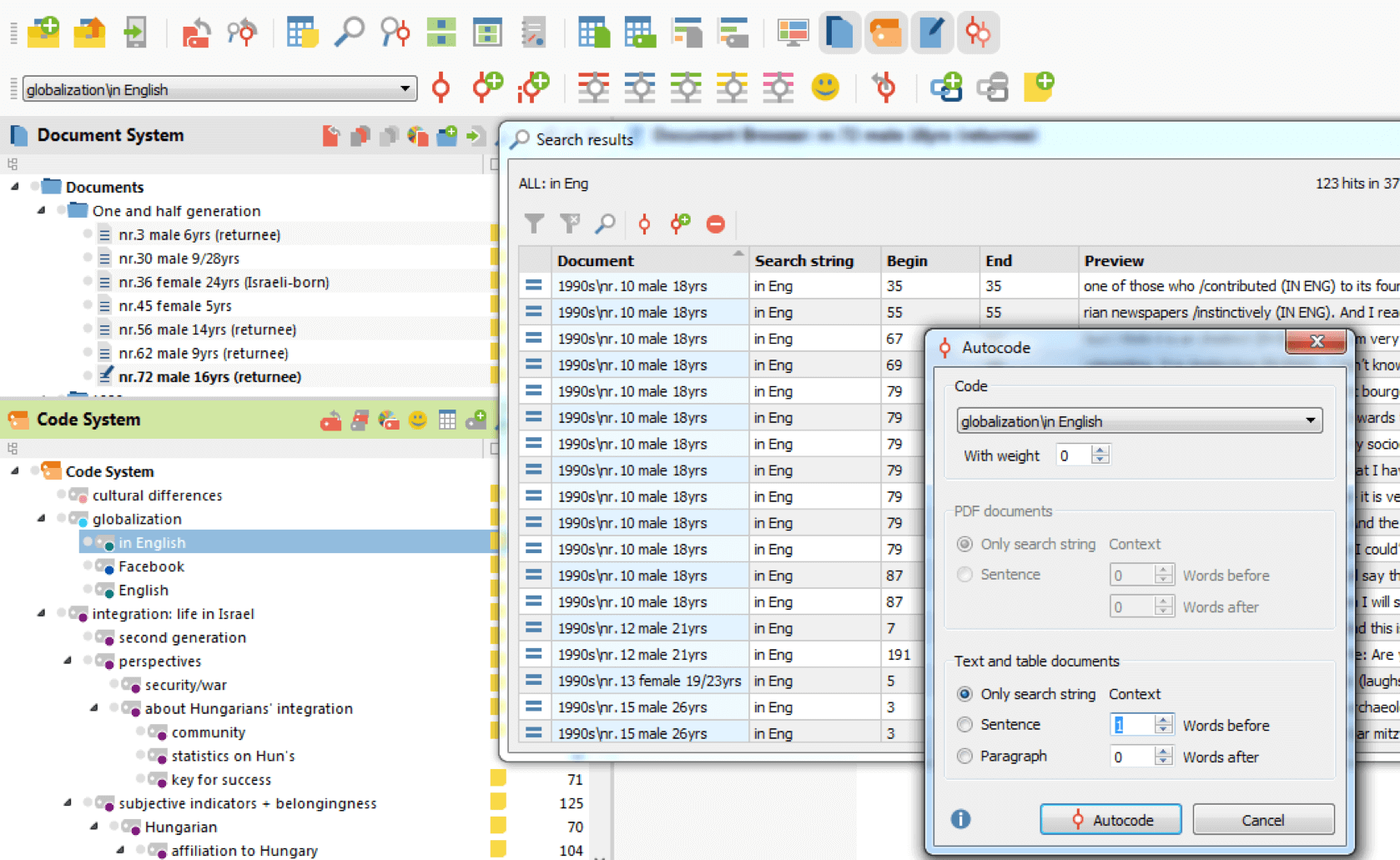 Autocoding all instances of “in Eng”

From here on I could open the list of coded segments for the code “in English” and check all instances of how my interviewees used English language and how this reflected globalization. In addition, while checking I could see if the use of English language somehow corresponded to the use of other expressions related to globalization (such as WhatsApp, YouTube, etc.) that I had already coded manually. Last but not least, the autocoding enabled me to compare frequencies, for example the frequency of usage of English language between young people and the elderly. This way autocoding not only saves time but opens up new research perspectives.

Want to know more about Autocoding?

Watch our video tutorial about lexical search and autocoding!