Elena Dowin Kennedy is a member of the Boston Youth Justice Research Project Team. Today she explains how the research group worked with joint coding.

Since the beginning of this project we’ve worked as a team to develop a plan for how to complete each stage of our research and coding was no different. Members of our team had different levels of familiarity with coding—some had previous experience coding by hand or with other software platforms and for some it was their first time.

How to begin with coding

We began by all coding the same interview—one of a youth organizer who had been actively involved in the movement we were studying. Each person read through and highlighted and labeled 2-3 sentence chunks with a broad code. When asked about the issues facing youth the transcript read:

A further research question we developed for this project was to examine how this time impacted the youth who participated. This was a clear part of our research partners’ desire to do this research, and it lead directly to the follow up probe to the above interview question where we asked “Did your participation in the movement change you in some way?” This naturally brought about the code of “Youth Impact”, which we defined as how the movement impacted youth personally through participation in the movement. It’s where we captured some of the most powerful statements of the youth movement beyond the time to a real powerful impact on them as adults and the paths that they chose. We could see the code in action, pulling those key pieces of data from the interview. It was an exciting development, and one that we as a research team could really see across the interviews, and one that we felt really worthy of pursuit.

A ton of stuff: Violence was at the top of the list. Transportation was a huge one. The reason I say that is because the high school that I went to was Roxbury High School, and if you didn’t drive, or take the school bus, it was almost impossible to get to school, because you had to take for me one train, and two buses, and then you’d have to walk six or seven minutes on VFW Parkway to get to school. So, the commute was a bit long. And so, I remember one year when they raised the fares, and how crazy it got for young people to actually get to school. I mean a ton of people, including myself, missed school because we weren’t able to afford to take public transportation, and that was a big issue for us. And so I’d say violence, transportation, both top of the list. 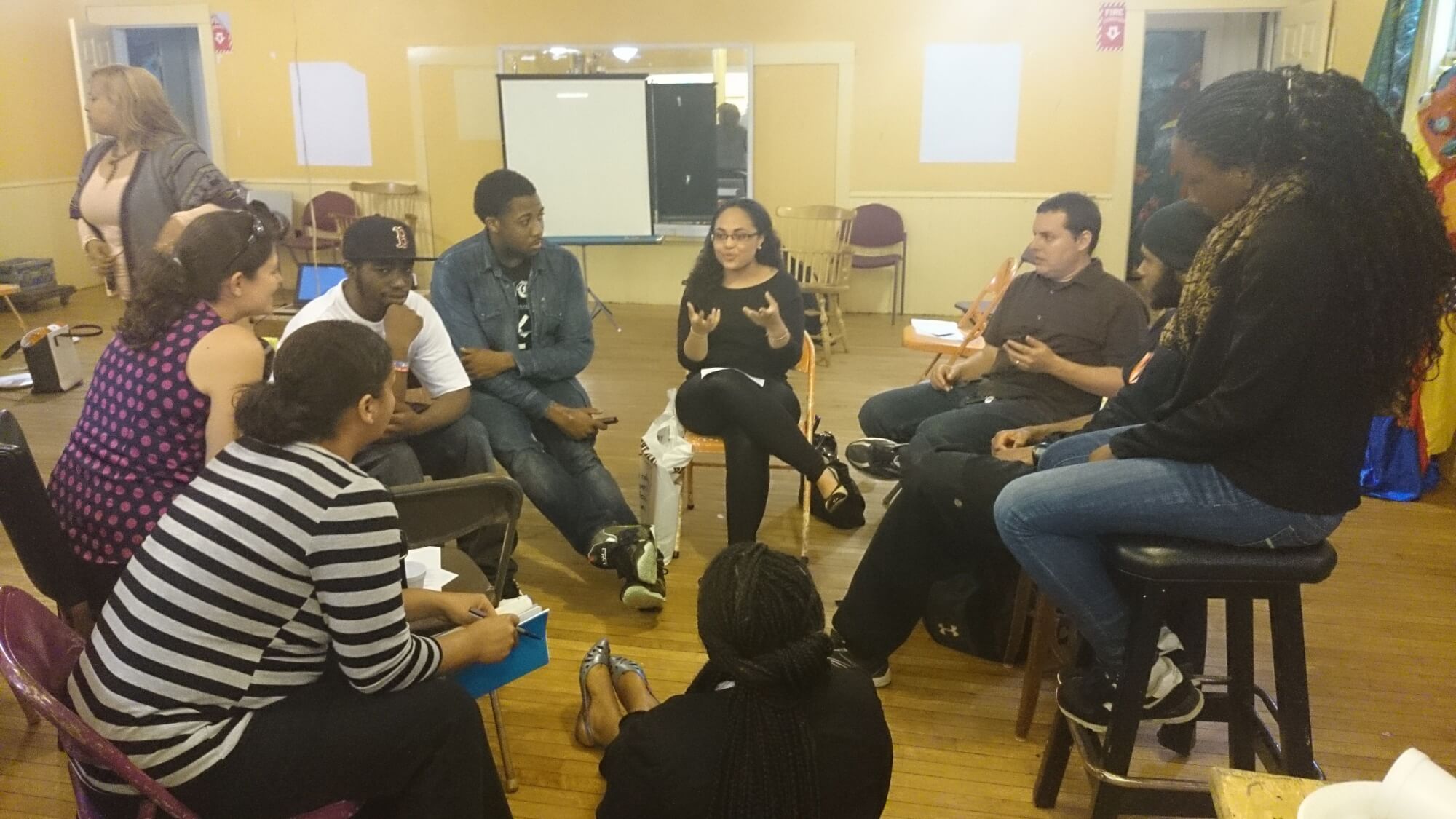 Being faced with this text and no codebook we had to go back to our research questions and come up with a way to start to make sense of the data. One of our questions was: How did youth and their allies, inside and outside these groups, contribute to the emergence of a youth justice movement? From this I decided that “issues for youth” needed to be a code, but I didn’t know if I wanted to code violence and transportation as separate codes. I also didn’t know how to break it up into reasonable segments to code. Our goal was to code 2-3 sentences and this section was seven sentences. For the first round I just highlighted the whole thing and called it “issues for youth.”

The seven of us on the team met and worked from the beginning of the interview to the end sharing what we had coded and discussing labels for the codes that we all could agree on. As a group we decided to keep our codes broad and stick with just one code for “issues for youth.” When we were done coding, we decided, we could always pull up the report on issues for youth and conduct second stage coding, breaking out the individual issues. In the end we agreed to code two segments of the paragraph:

Issues for youth: A ton of stuff: Violence was at the top of the list. Transportation was a huge one. The reason I say that is because the high school that I went to was Roxbury High School, and if you didn’t drive, or take the school bus, it was almost impossible to get to school.

Issues for youth: I remember one year when they raised the fares, and how crazy it got for young people to actually get to school. I mean a ton of people, including myself, missed school because we weren’t able to afford to take public transportation./p>

Through this process on the first day we established a preliminary codebook with 18 codes, which one member of the team uploaded into MAXQDA along with our interview transcripts for us all to be able to use.

Coding as a pair

Our next step was to split into pairs and work on a transcript within MAXQDA as a pair. We saved a backup copy of our group file and worked independently within that file to code using our preliminary codebook. Again we started by coding alone and then meeting to discuss any differences between what we coded and what our partner coded. There were numerous phone conversations comparing our transcripts. Through this process we learned that we had different preferences of how much to code, what codes we had used, identified codes that we needed to add and areas where the definitions we had developed were unclear. While coding we used the document memo function in MAXQDA to track this conversation and shared this with our classmates the next week.

Refining the Codebook during the Research process

During our class time we worked to build out new codes, refine the existing codebook and clarify any misunderstandings we had. We read each other passages that we were unclear about which code to apply and discussed them as a group. We also worked to refine definitions of the codes so that we knew when to apply them.

We struggled with questions like: what is the difference of the legacy of the movement and impact on youth? Is youth impact a legacy, or is it its own category. Coming together and having these conversations as a whole group were essential for explicitly naming the slight distinctions between codes and for all of us to be on the same page before moving further in the project. In the end we had 42 codes relating to everything from individual events and organizations, to internal organizing strategies, to relationships between youth and adults.

Finalizing the Codebook and finish Coding

We then worked on a second interview within our pairs and had a follow up conversation to finalize the codebook. We tried to make sure that we coded a wide range of interviews so that we could identify as many codes as possible early on and finalize the codebook before we moved on to individually coding interviews. By the end of the second conversation we had coded 6 interviews. Following this second conversation we each took one of the interviews to check and make sure that it conformed to the finalized codebook. After that we coded the remaining 18 interviews independently, confident that all understood the codes and were uniformly applying them.